Steely Dan at the Sound Board, Motor City Casino

She resembled Kate Hudson in Almost Famous: slight, lithe, sexy. Her hair fell in ringlets, but red, not blonde. She was no older than the 21 required to attend, and her ID may have been gamed. She moved to the music with both intensity and grace, with familiarity and joy. And she was dancing to Steely Dan playing “Reelin’ in the Years,” a song that was released when she and her husband or fiance—there was a flash on diamond on her left hand, and she probably would know it—were still unrealized, undoubtedly not even considered. But there they were with seemingly boundless enthusiasm.

Those two were an anomaly at the Motor City Casino, not with regard to their enjoyment and appreciation, but demographically. By and large, those who packed the venue appeared as though they would have just as easily been spending that Saturday night at a Class of 1977 high school reunion. The men were buldging and balding; the women were trying and sagging. “The weekend at the college / Didn’t turn out as you planned.”

But there they were, Fagen and Becker. Walter Becker, bearded and bespeckled, wearing a blue blazer over a striped polo shirt and a pair of jeans that he could have bought on sale at Meijer; Donald Fagen, behind the piano, channeling Ray Charles in artful appearance and demeanor. These are not the guys for whom screaming for could be imagined when they were in the flush of youth. Yet screaming and whistling there were, like when the home team won the Homecoming game. When have you attended a performance when the crowd en masse spontaneously sang along with the songs, without the performer cupping his ear or gesturing with a microphone toward the audience? It was Spirit Night. Somehow, the people imagined that they were back.

The Queen of Soul

It was a musically remarkable event, with the two against nature backed by a horn section, lead guitarist (Becker took a few leads but mostly tapped his right foot ever so slightly, then his left, as he played rhythm), bassist, drummer, keyboardist, and a trio of drop-dead gorgeous backup singers that would have made the late Robert Palmer jealous both visually and audibly. (As neither Fagen nor Becker had sung the lead on the original “Dirty Work,” in a stroke of something this side of paradise, the women took on the singing of that song. Who says you can’t buy a thrill? Fagen undoubtedly knows that his pipes are limited, so having a trio like that makes a significant difference.) 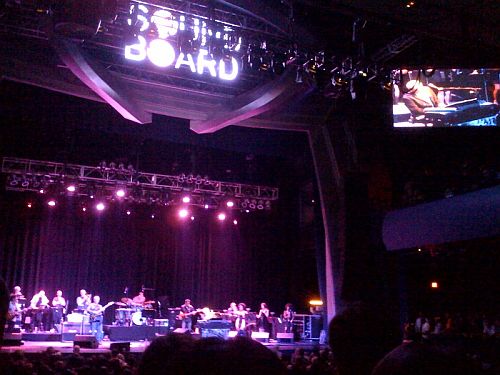 Steely Dan was not out on tour in support of a new album. The event at Motor City was the last performance in the Rent Party ’09 leg one tour. In some venues, they were playing albums in their entirety: Aja, Gaucho, The Royal Scam. Some nights they were playing what had been voted on via the ‘net. In Detroit, it was everything from “Black Friday” to “Peg,” from “Daddy Don’t Live in that New York City No More” to “Aja.” During Becker’s introduction of the band members, the Agee, Leonhart-Escoffery, and Russell sang the parts of Ross, Wilson, and Ballard, as they performed “Love Is Like an Itching in My Heart,” the Supremes hit of 1966.

The band didn’t play a song that was newer than a 1980 release. Consider that number for a moment. Do the math. Yet this didn’t seem to be a nostalgia tour, or one of those events put together for summer outdoor music venues or state fairs. This was a band doing what it is that they do. They were out in public, doing their jobs, paying their rent. They are professionals, not pseudo-phenomena. And they worked hard, and they worked well.

The Sound Board theater in the Motor City Casino is just two miles south of where Motown was born on West Grand Boulevard. Steely Dan knew where they were.