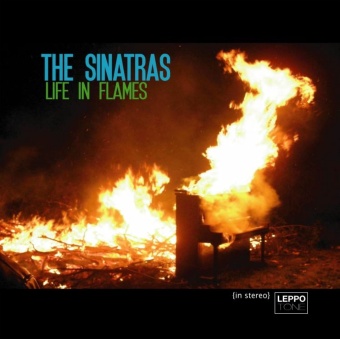 • Life In Flames is named after one of their songs…a song not included on the album.

• Ron says it contains “21 studio recordings from almost every stage of our career, with the most recent recordings having been completed in November of 2003.”

• Only four of the recordings were ever “officially” released, and two of those were only available on 7″ singles.

• The tracks on this CD were all taken from the “best possible sources and have been remastered by Kalamazoo studio wizard Mike Schuur.”

• Life In Flames will be available on iTunes and Emusic in approximately six weeks.

• On what drummer Scott Stevens‘ upcoming move to North Carolina means for the band, Ron says, “Scott and his lovely wife are moving to NC soon, but I do NOT expect this to be the last ever Sinatras show. We’ve been down to about 1 show a year since the Kraftbrau closed, and we don’t practice much, so I don’t expect this to affect our schedule very much at all. If anything, maybe we’ll get to play in NC every once in a while. (2 shows a year? I sure hope we can keep up the pace!)”

• On what’s next: “I suspect that, in Scott’s absence, Karl & I will continue to make music together. The whole Leppotone family hangs out regularly, and we swap players around to make up new bands every once in a while. Nathan and I keep blowing smoke up each other’s asses, John Kasdorf just bought a new drum set, so who knows?”

• Also, such a tease: “There are at least another 21 studio recordings, plus dozens of recordings from live shows, radio shows, and local TV shows, all of which are being reviewed and considered for our next release. (Does anyone else smell vinyl?)”

One thought on “The Sinatras Complete Their Album”