All Good kicked off with a night of homage to the spirit that infuses every jam band festival, the long departed, fondly remembered, and still crucially important Grateful Dead. Former Dead vocalist Donna Jean Godchaux opened the musical celebration, one of several former Dead members scheduled to take the stage this weekend. While many in the audience are here for Friday’s four-hour scheduled performance by Further, Thursday night was the warmup that may overshadow that headliner.

Godchaux and Dark Star Orchestra guitarist Jeff Mattson laid into a nice version of the Dead’s “Sugaree” to get things going. It was still brutally hot at the time, with the sun lingering over the tree-line at Marvin’s Mountaintop. Weather forecasts had called for blistering 94 degree temperatures Thursday, but in the wide-open fields of the festival grounds, it felt like 194, as early comers sat around all day and waited for the evening of music. The alternative to getting here early was sitting in hours of traffic, backed up for miles on the dusty dirt road leading up the mountain from nearby Masontown, West Virginia.

Godchaux and her band played a short but excellent set, leaving the audience wanting more after less than an hour. She can still sing beautifully as well as belt out a tune, and her presence here was uplifting, reminding us all of the great memories we have of the Dead, whether contemporary or recreated through the live recording scene that’s still vibrant on the Internet.

The crowd really started to fill in by the end of her show, and enthusiastically embraced the next band, an outfit called Fort Knox Five. These guys are a great party band that blends DJ turntable work with live instrumentation, playing a danceable mix of funk, reggae and electronica. Their set was either a good reason to dance your ass off, or in the GloNo posse’s case, fortify ourselves for headliner Dark Star Orchestra. 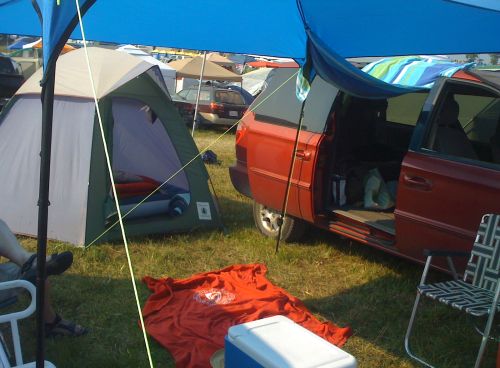 DSO is the premier Grateful Dead “cover band” on the circuit today, but they’re way more than the sort of outfit you may have seen playing bowling alleys pretending to be your favorite forgotten act from adolescence. These guys recreate the live Dead experience, in some ways better than seeing real members of the Dead themselves. I had not previously seen DSO, but reports from others in the GloNo posse had been gushingly positive. Still, I was unprepared for how closely the DSO experience comes to replicating a live Grateful Dead recording. DSO’s set was unbelievable, launching into a “Scarlet-Fire” to begin things and keeping the energy going with an extended jam on “Feel Like a Stranger.”

By that time the audience was wild with dancing and the night had grown dark. Once things got crazy onstage the mass of bodies in motion was like a giant writhing organism. The huge area in front of the stage at All Good is almost completely unlit, making navigation difficult for the thousands of people tripping, staggering, and stumbling about. Since we’re on the side of a mountain, there’s not a flat square foot of land to be found, which just sends everyone even more off kilter.

DSO often recreates set lists from historic Dead shows, but this evening it was an original show, one that spanned several eras of Dead. Among the more obscure songs in last night’s single long set was an under-appreciated Brent Mydland song, “Blow Away,” and “Cassidy,” a beautiful early-’70s Dead tune. Neither are as well-known as “China Cat Sunflower” and its rocking siamese concluding number “I Know You Rider.” That pair gave DSO the opportunity to show off its extended jamming abilities, which is where they really shine. It’s one thing to be able to recreate versions of Dead songs, but another to be able to improvise and sound as good as the Dead did when they were jamming back in the day. DSO does it, and it blew my mind.

After a nice “Eyes of the World” into the “Drums/Space” jam that afforded an opportunity to drink one last beer and really assess what was going on, DSO launched into a lengthy coda of “St. Stephen” into “The Eleven” into “Not Fade Away” that hooked into my state of consciousness in a way that was not unlike experiencing 30 minutes of deja vu. I could hear the notes they played before, during and after they played them, and I could sense the coming of “NFA” a good ten minutes before it happened. The show concluded the only way it could at that point, with a “Morning Dew” that serenely sent us off into the night, oblivious to whatever was happening on the late night stage.

Years of observing 2 a.m. liquor curfews have trained my body to be in bed no later than 3, so GloNo called it a day, heading back to the minivan compound to sleep it off. But not before realizing that DSO, even in its admiration for all things Dead, had thrown down the gauntlet. The guys in Furthur weren’t on site Thursday night, but they now have even bigger expectations to live up to — you don’t want to get shown up by your cover band.

Furthur is the current “official” version of the Grateful Dead featuring Bob Weir, rhythm guitarist, and Phil Lesh, bassist. They toured last year as The Dead, with drummers Mickey Hart and Bill Kreutzmann, and lead guitarist Warren Haynes taking on the Jerry Garcia role. This year the drummers have been left to tour on their own (as The Rhythm Devils) and Weir and Lesh have picked up members of Weir’s band RatDog and Dark Star Orchestra guitarist and singer John Kadlecik. Their performance tonight promises to be monumental — it had better be, given the events of Thursday.