Earlier in the day, GloNo caught strong performances by Greensky Bluegrass and Femi Kuti. Greensky’s amplified acoustic jam on the Grassroots Stage was a perfect way to start the morning. A cover of Grand Funk’s “American Band” resonated with those of us unfamiliar with this band, and certainly acted as a beacon call to passerbys. Greensky’s creative use of reverb and other effects makes them more than just another group of jam-band-fest pickers. Several hours later Femi Kuti delivered a frantic set of Afro-pop on the main stage, an entertaining show that deserved later billing. 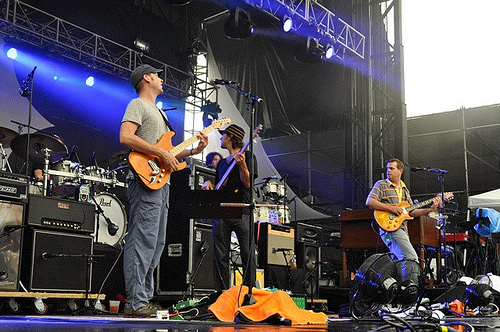 But Friday was overbooked already, with Furthur absorbing the better part of the night and Umphrey’s McGee scheduled to bridge the gap between daytime artists and the band most everyone there had driven many hours to see. Umphrey’s offers delights of its own, a hard-edged style of jamming that’s only slightly removed from prog rock and metal, and evokes comparisons to Rush, Pink Floyd and Frank Zappa. Covers of both Springsteen and Miles Davis numbers were wild. The hippies love it, as well they should, as Umphrey’s may be the best stoner rock band performing today.

With the rain having passed and nothing to mute the anticipation of Further, the crowd surged in size and density to absolutely pack the main stage area. Guesses as to which song would be the opener proliferated, though probably nobody outside of the band had any idea it would be “After Midnight.” A strange choice, perhaps, as local time was just 9:30 pm, but the song served a dual purpose of setting the theme and foreshadowing later events, as the band would play well past 1:00 a.m.

Further’s two sets were not the sort of “greatest hits” show you might expect out of a band composed of two former members of the Grateful Dead, guitarist Bob Weir and bass player Phil Lesh, along with former Dark Star Orchestra guitarist/vocalist John Kadlecik. Rather, this band seems to have been formed to try and get back on the exploratory side, to resurrect the improvisational spirit of the Dead and create a space where Bobby and Phil can invent and jam. 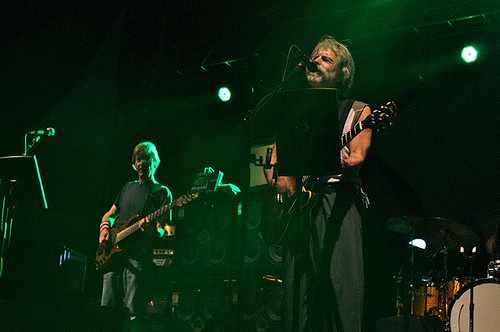 Friday night it worked. Although the band played plenty of songs that would never make a Deadhead’s list of favorite Dead tunes, it seems that those selections, by virtue of their very oddity, energize Bobby and Phil in a way that allows them to really blast off. And it’s not as if the band played only obscurities — with huge jams on “Estimated Prophet” and “Brown-Eyed Woman” in the first set and (later) “Terrapin Station” and an avant garde “Scarlet-Fire” there was no way any self-respecting Deadhead would criticize the set list. Furthur even played “Ripple,” one of many points in the evening that you had to imagine the guys were thinking about Jerry.

Fifteen years is a long time, just about enough for an entire generation to come of age. Indeed, the numbers of kids here who were in kindergarten the last time Jerry played a note is amazing. The legacy of the Grateful Dead still maintains a devoted following, of course, but the fact that this scene continues to grow says something important. The music world, as broken and out of sorts as it may seem in the headlines, is thriving and alive — and apparently it still needs the Grateful Dead.