I’m going to summarily dismiss Widespread now, and I don’t want to hear about their nearly 25 years of greatness. I’m aware of it, of their following, of their sound, and I just find it boring. Yes, I’ve listened to their CDs, tried to get into their live recordings, and now that I’ve seen them, I’m glad to have answered that most basic question: I don’t like them. (Just like I don’t like the Allmans, so there.)

What I do like, and what attracts me to the entire jam band movement, is when things get heavy and improvisational and yes, jazzy. So I’m glad to see The Macpodz, a local Ann Arbor band, getting national attention, because these guys are a natural fit to the scene. They’re a jazz quintet, plucked from halls of the University of Michigan music school, but not one of the straight, no chaser, variety. These guys play funky, Miles Davis On The Corner-era fusion and they know how to rock the house. Too bad that so few people managed to get up and out to their noon set.

Rebelution was more fortunate, in that the main stage area had filled considerably by the time they lit into their party reggae act. It’s damn near impossible to take anyone from Santa Barbara seriously, let alone these Rastafarian Gauchos, but Rebelution clearly did not care what I thought. The band’s performance was perfectly timed to excite the sun-baked afternoon crowd, and my disdain for Californians and fratboy reggae melted in the heat. Rebelution bassist Marley D. Williams deserves an award for most earth-shaking tones of the weekend, out-thumping even Furthur’s Phil Lesh. 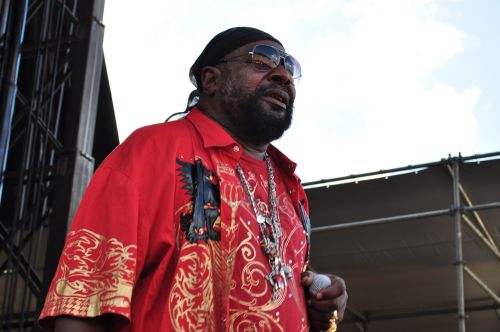 But my day really belonged to George Clinton, a sentimental favorite who I hadn’t seen since the mid-1990s. I’d been to several Parliament/Funkadelic shows during that decade, but it had been so long, I was deeply concerned that Clinton and company would no longer be able to tear the roof off. Less than two weeks shy of his 69th birthday, there’s no hiding the fact that George is old. (Not to mention that he has not lived the most healthy lifestyle over the years.) But what Clinton may lack in youth, he makes up for in aged cool. His late afternoon set was typical of what I’d seen fifteen years ago, a greatest hits celebration that featured at least one long, unlistenable rap song that afforded an opportunity to get another beer and use the toilet. The hour-plus performance began with somewhere around a dozen musicians, dancers and singers on the stage, and by the time it was over, the body count was over 30. It was wild, frenzied, sloppy, and totally awesome. Even funkier than the day itself.

Editor’s note: After three days of sleep-deprived partying and reporting, the GloNo posse called it quits and fled its campsite/compound on the morning of the 4th day of All Good. Regrets are extended to Keller Williams, who we will hopefully see later in the summer at Hoxeyville, and Grace Potter, who we encourage to come visit us in Michigan as a headliner sometime soon.