The news broke in the cafeteria of middle school. The group that I normally sat with was strategically located between the jocks on one end of the table and another group that those with higher economic backgrounds would call “scurves.” 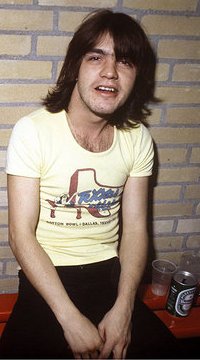 To get an idea of what the scurves looked like, one only needs to pick up a copy of any AC/DC album during the ’70s, take a look at the band’s rhythm guitarist Malcolm Young, and you’ve got a perfect image of nearly every person in that social strata.

One day, a couple of the Malcolm doppelgangers made their way into the cafeteria late and joined the table. The school was strangely complacent with allowing students to leave the grounds, particularly if you were part of this notorious bunch where truancy was conveniently overlooked. They usually just wandered across the street to smoke a few Marlboros before returning to finish the last half of the school day.

But on the day of Bon Scott’s death, the two who brought the rest of the table the bad news didn’t seem inclined to finish the rest of school. In fact, they were looking for additional participants for a makeshift wake.

I had only recently become familiar with AC/DC, so my reaction was not as careless as the rebels at my table. I didn’t think that Mr. Scott’s passing was deserving of a detention or, worse yet, a phone call from the home/school liaison office notifying my parents of an unauthorized absence.

At the time, Highway To Hell was the only AC/DC album I was familiar with. There was a Happy Joes pizza parlor in town that we all frequented after high school football thanks in large part to the fact that they had the first Donkey Kong console in town and a jukebox will lots of decent songs.

We’d all stop by after the game to blow our money on games of Donkey Kong and Mountain Dew. Any change left over was dropped in the jukebox.

On Friday nights, you’d hear the single “Highway To Hell” at least four or five times, and when we’d finally tired of it we’d punch up the flip side and play “Night Prowler.” We’d wait all the way to the end and blurt out “Shazbot. Na-Nu Na-Nu” along with Bon Scott, his brief acknowledgement to the TV show Mork & Mindy after his scream of “there ain’t nothin’ you can do!”

The summer after Scott’s death was one of the best summers I ever had. I got a kick ass Honda Express moped, which meant that the town was my oyster…as well as the surrounding states of Illinois and Missouri.

The moped made it possible for frequent trips over to the Show Me State where I would load up on fireworks and bring them back over the border for bottle rocket fights and regular explosions of model cars.

I even blew up a copy of the Village People‘s In The Navy album because I heard some DJ in Chicago told people to blow up their disco albums.

That summer also enabled my classmates and I an early start on tormenting the incoming 7th graders. We were looking forward to becoming the top dogs as 8th graders, disposing the same torture to the younger boys as we received the year before.

There was one 7th grader named Sean who was offered a reprieve from this hierarchal pestering. I befriended Sean one night after watching him get into a fight with one of his classmates and spent the rest of the evening with him looking for celebratory intoxicants.

On the morning after, I drove my moped over to his parents’ place. His older sister was dating a reliable source for drugs and we had hoped to utilize this connection for a bit of weed.

He was out of pot but he did have something else for sale, a drug that I had never even seen before. I was impressed by Sean’s apparent knowledge of cocaine, and because he was younger than me I felt the need to appear cool.

We returned to his place and retreated to his room. His parents weren’t home, which isn’t to suggest that Sean was a neglected kid. On the contrary, his family was built from strong suburban stock, but as the youngest child, Sean was granted an incredible amount of leeway and space. He just chose to spend his freedom on things like pot, coke, and AC/DC’s Back In Black.

The cover to Back In Black is perfectly designed for cutting up lines of cocaine. The raised lettering of the first pressing makes a great receptacle for holding the excess powder and the black color leaves no trace of the drug hidden.

As a moped driver, I was required by the state of Iowa to carry a learner’s permit. I never really had to “use” the permit for much of anything, but Sean found a good application for its thin design.

I watched him line up equal portions of the coke, roll up a dollar bill and devour his line with both nostrils. I was glad that he was greedy and went first; I needed a visual reference to find out how the drug was consumed.

He handed me the bill, got up from his unmade bed and walked over to his stereo. The album was already on the turntable and past a few pops and clicks came the sound of a bell. A slow electric guitar pattern came next, reminding me that it was my turn to step up.

“How is it?” I asked, stalling for time and pretending to care about the quality of our purchase.

Sean nodded with approval, playing an air guitar in synchronization with Angus and Malcolm. I was unsure before if the quarter-gram of powder would be a lethal dose, but the shit-eating grin on Sean’s face seemed to point to a healthy buzz. I repeated the steps exactly as I remembered him doing, hoping that my naïveté would not be noticeable.

My life is flashing before the sky.

The coke burned my nostrils and I could feel my heart racing. I wasn’t sure if it was from the blow or the excitement of jumping headfirst into schedule II drugs.

I didn’t die, though. I felt fine.

We made it through the entire record…well, somewhat. Sean kept picking up the needle and moving it to the songs that he liked the most, chattering the entire time about how awesome the album was.

The next day, I bought a copy of Back In Black for myself, one of three that I eventually purchased since its release. That’s three of the over twenty-one million copies that have been sold in this country alone. That’s twenty one million different stories for which this album provided a soundtrack, some better than mine, some worse.

But because my story is so closely tied with this tale of youthful irresponsibility and danger, I find it strange that Back In Black has reached such a level of success that it’s a permanent fixture in mainstream society. Its origins came from a place of tragedy and it remains with me as a soundtrack to teenage rebellion.

At the end of the day, it stands as a perfect rock record, something that can be listened to from start to finish without pause and something that translates differently from ear to ear.

I still listen to it a few times every year and, despite the incessant spins of the obvious tracks, I enjoy it for the manner in which it rocks and appreciate the memories that it provides.

Occasionally, I’ll come across another vehicle at a stop light with windows down, cranking out Back In Black from the car stereo. It makes me smile.

Sure, they may not have the same feelings about the album that I do, and maybe they don’t associate it with anything more than a great tune to turn up and share with other commuters, but I still feel a kinship to that other driver.

Because if you’re into evil, you’re a friend of mine.

4 thoughts on “Back To Back In Black”