Last week I had the good fortune of getting a call from a friend who was an impromptu opener for Cubic Zirconia to “be at Mercury Lounge in 20 minutes to go in on half-priced drinks.” Now that we’ve established that I may have a drinking problem (who travels from Brooklyn to the city for “cheap” drinks?) I’ll go in on this band.

Cubic Zirconia is comprised of front woman Tiombe Lockhart, keyboardist Nick Hook, Daud Sturdivant on guitar and then some new (can’t remember his name, because of the half-priced drinks) really hot dude on the drums. Lockhart walks onto the stage clad in a faintly cooler (it was leopard print) version of an American Apparel tight-ass dress and black stirrup-stockings (no shoes) and purple (genie-in-a-bottle inducing) headgear to boot. Her face was soft yet fiercely striking. Her body has actual meat on it (amen), unlike the throng of equally popular NYC frontwomen.

And then the show begins.

After one song, her once “dress” becomes a shirt, revealing the crotch of the stirrup-stockings, the clasp of her bra has somehow come undone (maybe the hot drummer popped up and unclasped her bra while I was staring at the bottom of my half-priced drink) and her backless dress then had the remnants of her bra sticking out on either side. Oh, and her fiery red lipstick was slightly smeared. What just happened? Cubic Zirconia?

They are rough, rough to the point of sounding unrehearsed. They are messy, messy to the point where you no longer think they’re the (semi together) hipsters that entered the stage but maybe, might just be a real life rock band! There is a term thought up by French cultural theorist, Jacques Lacan called jouissance—when something is equal parts grotesque and sexy. It is when you are attracted and find eroticism in something because it’s so gross and so pleasurable that it becomes too painful to endure you must orgasm. Cubic Zirconia was an experience in Lacan’s jouissance ending in proverbial climax. 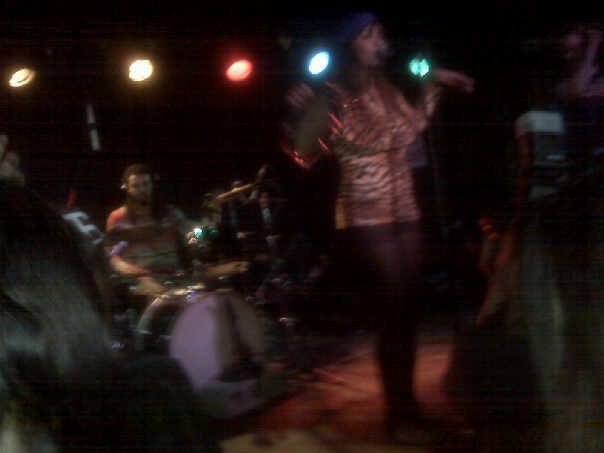 I wasn’t sure if I was turned off by the fact that Lockhart’s jazzy and obviously trained voice was weird for being off-key or thought it being off-key was refreshingly badass. Or gross. Or hot. Or sick. Or beautiful. I wasn’t sure if her exposed cootchy was rock and roll or negligence. Or intentional. Or hot. Or gross. Or sick. Or beautiful. I wasn’t sure if Nick Hook’s sometimes out of sync key playing was annoying. Or awesome. And in the end I was in such a whirlwind of stimulation I was in pain.

Right-o friends, they defy the social constructions attached to what is beautiful. And I don’t defy my liberal arts education because I love to insert “social construction” whenever possible! And that also probably lends itself to why jouissance was definitely at work in me for, like, the whole show. Their beats are incredible, borrowing from semi-obscure old-school tunes like “Moments in Love” by Art of Noise. There are definitely moments where the cacophony of the beat kicks Lockhart to the periphery and rules the stage. But then her layered, bluesy voice comes back in just at the right moment, just when you’re at your tipping point and you think you can’t take the noise any longer. Nobis Pacem. Pacem. But she doesn’t keep you there for long. She screams and yells, matching the (previously) rivaled beats to form a harmonious blend.

The catchiest and poppiest song of the night was definitely “Josephine,” a mélange of talk-singing but not in the annoying way that makes you hearken back to the 90s hit ‘Where Have All the Cowboys Gone’. Instead, I actually enjoy the lyrics: “Sloppy Josephine you’re such a bore / You’re such a whore,” which Lockhart repeats throughout the song. Unlike many of the other more indistinct sounds and arrangements this song definitely has pop-power.

They’ll be at SXSW next week. If anyone is going and they’d like to put me in their suitcase or put me in a big plastic bag and snort me up and ingest me only to poop me out (‘Maria full of Grace’ styles) once we get to Texas that’d be fine too. I’m seriously OKAY with that.

8 thoughts on “Cubic Zirconia is Lacan’s love child, may cause orgasms”