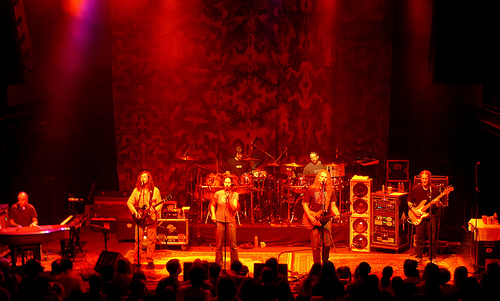 Dark Star Orchestra at the 9:30 Club

Dark Star Orchestra played two outstanding shows at the 9:30 Club in D.C. in November. Friday’s show (Friday the 13th! Spooky!) replicated a Grateful Dead show from 1976, and Saturday was a “roll your own” show, with the band putting together their own set lists. Both shows were good, and the first night was great. The crowd was inspired both nights, singing along with all the songs, and the band played like it was a special occasion. Someone I spoke to on the second night – a guy who had seen 30 Dark Star Orchestra shows – said Friday night was the best Dark Star Orchestra show he’s seen.

I haven’t seen that many myself, but I still can’t say enough good things about that first night. It was an inspired show selection, with a roaring rendition by the band. The show they played – June 27, 1976 – was from the second of a four night run at the Auditorium Theatre in Chicago (Which is where, incidentally, Furthur just played this past Tuesday and Wednesday). The audience loved it. 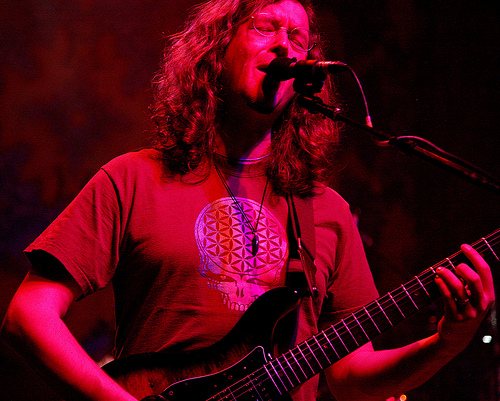 It was a wet, rainy day in D.C., and the show they picked from that run had a good number of rain related songs – Cold Rain and Snow, Big River, Looks Like Rain – and the encore is U.S. Blues, right for the time of year – “summer time done come and gone, my oh my.” I can’t say the rain had anything to do with the set list they selected, but you never know. 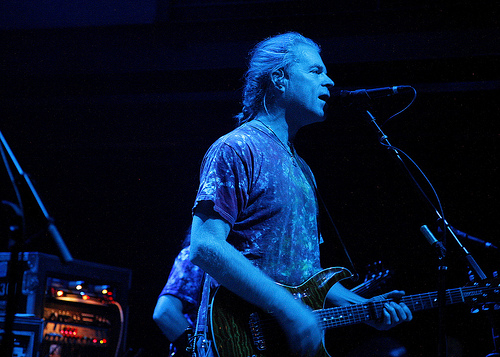 To my mind, the mid to late 70s is arguably the most exciting period in Grateful Dead history. Blues for Allah, a record of new material, was released in the fall of 1975. On the 1976 summer tour, they were doing much of the material plus a retinue of well road tested material – Friend of the Devil, Looks Like Rain, and Wharf Rat, to name a few in this show. There isn’t a bad song in the lot, and DSO did them all justice. The first set starts with Cold Rain and Snow – a traditional song arranged by the Dead – and had one of the cowboy songs – a cover of Johnny Cash’s Big River – they like to play. Cold Rain and Snow got the crowd engaged and responding to the band. It’s one of those songs the whole audience knows and everyone sings along with. Ship of Fools through Looks Like Rain was a highlight of the first set. The second set, with the Help on the Way -> Slipknot -> Franklin’s Tower song trilogy from Blues for Allah, maintained the same energy level. 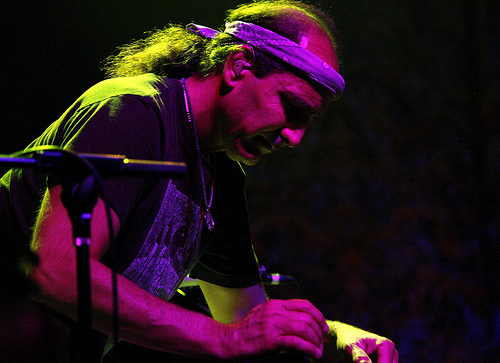 The second night has much to be said for it, too. A lot of really great song picks, and the band really embraced the energy of the crowd. I managed to position myself up front, right in front of the resident Jerry and the keyboard player. The best place to be. They kicked it off with Hell in a Bucket, a song I’ve only come to really know and love since they released it for Rock Band. “I was drinking last night with a biker, and I showed him a picture of you.” Of course you did! A real barn burner to kick off the night. Next was a China Cat Sunflower into I Know You Rider. Always a crowd favorite, with a boisterous crowd singalong, especially in I Know You Rider. The whole crowd knew the words. “I wish I was a headlight on a northbound train!” It’s pretty awesome to hear a thousand people sing that at the same time in an indoor venue like the 9:30 Club. 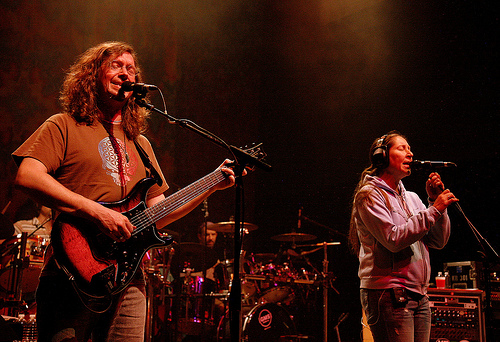 The first set rolled on after that, rounding things out with Visions of Johanna (Obligatory Dylan Cover? Check!) and a nice Music Never Stopped. The second set started out like a list of songs I hope to hear but never expect to. I about dropped my freshly poured frothy beverage when I heard the thundering intro chord to Shakedown Street. I’ll admit it. I got a little excited. It’s a great song for dancing, with plenty of open space for musical exploration by the band. It typically doesn’t disappoint, and that night was no exception. Then Man Smart, Woman Smarter. A great Bobby cover, one of a handful of Caribbean type covers (country and blues covers are more common). Harry Belafonte popularized it in the 50s. I could almost hear Bobby and Brent singing this one. They really captured the essence of it. Then Terrapin Station. Why Don’t We Do it In The Road was the strangest pick of the night – I don’t think I’ve ever heard the Grateful Dead play it. So that was a bit weird, but an interesting way to remind us that they are not the Grateful Dead. 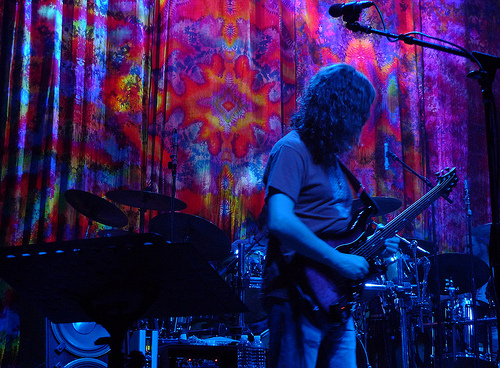 I will say this: The Dark Star Orchestra is the best Dead cover band I’ve seen. And I’ve seen more than a few. They’ve got the full band – two drummers, two guitar players, a bass player and keyboard player. When they do shows from the 70s, there’s a woman who takes the Donna role. And they’ve been touring together for years, building a decent following along the way. They’ve mastered the art of recreating Grateful Dead shows, set for set, song for song. Along the way, they started crafting their own sets as well. We saw both in this two night run. 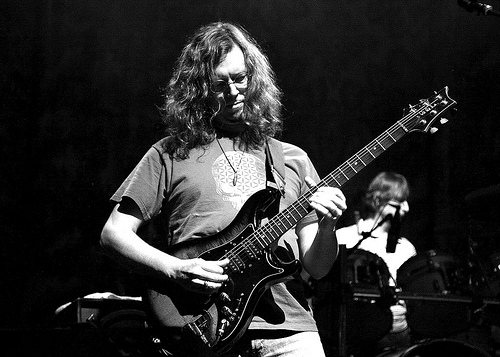 Perhaps the second night was a farewell of sorts for John Kadlecik, a founding member and the resident Jerry who announced he was leaving the band the Monday after the shows at the 9:30 Club. So these were the last two shows before the band made Kadlecik’s departure public, and announced his replacement by Jeff Mattson, who played with the Donna Jean Godchaux Band (Kadlecik played a handful of additional shows after the announcement, before passing the torch to Mattson). Kladlecik is a skilled guitar player and singer, adept at playing the Jerry part. But he does do some unique solo work, with the obvious Garcia influence, but still his own. It really comes out when the band ventures out into the wide open spaces, and Kadlecik starts exploring. You can hear it in the second part of Let it Grow especially. Ship of Fools, too (both from the Friday show). 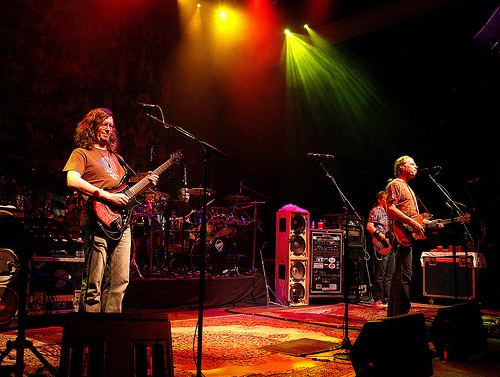 It was a packed house both nights. A lot of energy and excitement in the air. Everyone knew the songs and the lyrics (mostly). The sound was good, from both the main floor and the balcony. Both were general admission, so you could move freely from one to the other. Always a good thing, and there were decent sight lines all around. I remember they had good drinks, and lots of beer. I especially remember the narc turrets. Above the balcony, on either side of the stage, facing the crowd, were two elevated turrets from which security could monitor the crowd for smoke. You see, Maryland doesn’t allow smoking in bars anymore. So any smoke is suspect. The immediate assumption – probably a good one – is that any smoke sighted is marijuana. So the security guys in the narc turrets would radio to their compatriots on the ground, and they would zero in on the perpetrators. To their credit, I think they give everyone they catch a warning rather than just kicking them out. But that’s one unintended consequence, if you will, of cigarette smoking bans. Which are, after all, a good thing.

So what’s the moral of the story? Go see Dark Star Orchestra. They are a great band, period. Tons of fun, and the crowd crackles with energy. Everyone wants to have a good time, so that’s usually what happens. It’s like the guy in the movie says: “there’s nothing like a Grateful Dead concert.” Dark Star Orchestra does a great job of keeping that spirit going.

All MP3 links via the Live Music Archive. All photos by AMP.

2 thoughts on “Channeling the Dead: Dark Star Orchestra in DC”