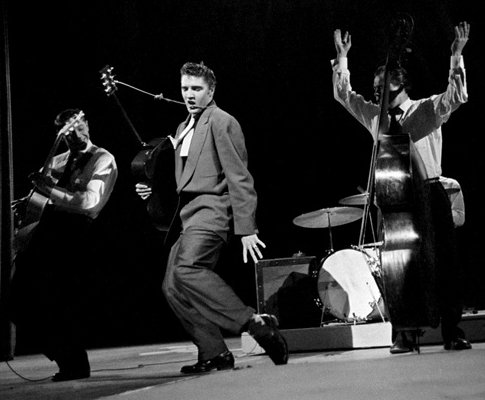 Elvis Presley would’ve been 75 today. To celebrate, Sony/RCA has released a new box set, Elvis 75 – Good Rockin’ Tonight. It’s 100 songs across four discs spanning his entire career. Kind of skimpy on Sun sessions and 1969 Memphis sessions, but it looks like a nice introduction to casual fans who want to dig a little deeper than just the #1 hits.

The exciting news for Elvis freaks (like me) and audiophiles is that they’ve gone back and remastered everything. And by “everything” I’m not just talking about 100 tracks on this new box, but everything. Elvis reissue producer and archivist Ernst Jorgensen describes the project after the jump…

In an interview with MSN’s music blog, Jorgensen describes the most recent remastering project:

“If you had the ideal way to listen to this you’d have it in the recording studio with the actual analog tape playing back on the machine it was recorded on and the speakers it was recorded on. This is the constant struggle for us, to get closer and closer to that. With the new technology we can transfer the tape with a higher resolution. We can work with it in 24-bit, 32-bit environment, and make sure we get as close to the exact sound as the analog tape…. We’ve taken every one of Elvis’ 711 masters and tried to do a better job on them. On some the improvement will be more important than on others. It all depends on how well we did before. It’s interesting to do it. It’s a joy to do it. I think that most people, unless they sit there and A/B it versus what they had before, they’re just gonna say ‘Wow, this sounds great.'”

So…cool. Wondering how you can get ahold of all of these 711 remastered Elvis recordings? Well, for now, there’s only one place: the Franklin Mint. No shit, it’s true. The folks that brought you (brought me, anyway) the commemorative Barack Obama coins are now offering Elvis: The Complete Masters Collection, containing all 711 masters arranged into 36 “unique volumes” for $399.00, plus $29.95 shipping & handling. But they’re all out of order, grouped into corny volumes like “Loves Lost,” “Start Your Engines,” and “Fun At The Fair.” 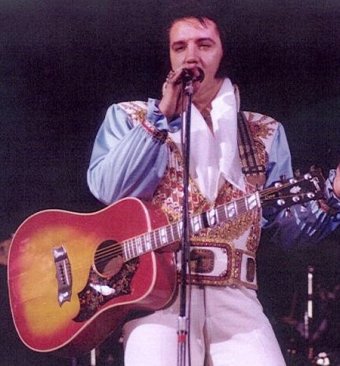 Here’s what Jorgensen posted to the Elvis Collectors Forum on December 30:

In March of 2007 SONY decided to go through all Elvis masters (we can always argue about what is a master and what’s not). We retransferred everything (again, “everything” can be argued as in some cases there is no original record master), remastered all tracks including repairing as many clicks, pops, bad edits and dropouts as we could. Vic Anesini spent literally hundreds of hours on the project, as did Sebastian Jeansson, who worked as our audio consultant on the project, tirelessly pushing Vic and I to try new ways of improving the sound. We have used these newly mastered recordings on our new releases including the gospel box, several digital download albums, budget releases, and yes, the Franklin Mint package. There is nothing unusual about this, maybe except for the commitment of a record company to finance such a vast project.

Ever since I started (and certainly before that as well), we have tried to improve the sound of Elvis’ recordings. Since we believe these new masters are better than what we had before, you can argue that we didn’t a good job in the past, but you can only do the best you can at the time you do it. Technology improves, and with Vic Anesini joining our team, tremendous knowhow has been added to the process. Vic now has become familiar with all the oddities and challenges of the Elvis tapes. Sebastian Jeansson has been a tremendous support and supplied lots of technical information as well as lending us a great set of ears. Even I may have learned something along the way.

Does this mean that these “new masters” are the end-all masters. Definitely no! The nature of our work is to always try and do better – that should never stop.

New technology may one day be available, new tapes may turn up, and solutions to still existing problems may appear.

I have seen messages that want to discard the work done before, and consequently the contribution of the people who created the previous releases. It seems very unfair to me. Whatever we released before (you will be able to point to exceptions) was the best we knew how to do at the time. Every engineer and producer who went before has taught as something important that is now part of the knowhow we have.

The Franklin Mint set is a release like every other release, a package designed to the needs of the Frankliln Mint company, and should not be confused with any other bigger package. At this time there is no information about any other box coming out, or not coming out, and it would not be up to me to release such information, anyway, Please don’t start overinterpreting this, SONY will as always publish information about upcoming releases in a timely manner, and release plans are under constant revision.

So it looks like Sony is using these new remasters as the default versions for Elvis releases now, but it would be great if they could release a nice, chronologically sequenced box with good liner notes, etc. But for now, it’s cool that all this stuff is available, and that the label is still interested in putting this level of care (and resources) into this material. I’m sure it’s profitable for them, but like everything else in the music industry, the question is really: Is it profitable enough? Must be. Otherwise they wouldn’t be doing it, right?

Black and white photo by Al Wertheimer via the excellent Vanity Fair article, The First of Elvis.