As most people know, John Lennon was gunned down in New York City on December 8, 1980 by Mark David Chapman, a loner from Hawaii with a Holden Caulfield complex and an intense drive to make a mark. What many don’t know is that earlier that day Lennon had signed a handful of autographs for fans, including the album cover of his latest release Double Fantasy.

Letter of Note is a cool little blog dedicated to highlighting “correspondence deserving of a wider audience,” where they publish personal letters of note. Today they have a letter from one of the autographer seekers from that day to a collector wondering about the value of an item signed by John Lennon on the day of his murder. To say anything more would give away the surprise but check it out.

A clue on who the letter writer is after the jump… 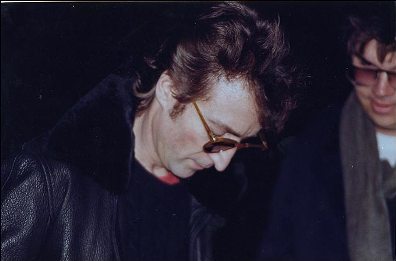 John Lennon signs a copy of Double Fantasy for Mark David Chapman on December 8, 1980. Hours later, Chapman would kill Lennon in front of the Dakota building in New York City.

The Daily Mail reported on this letter in August, 2008 and provides a few more details around what happened to the signed album:

In the letter, Chapman tells how he then placed the signed record beside the security guard booth outside the Dakota Building.

It would later be found by Philip Michael, from Hamburg, New Jersey who gave the album to police. It was returned to him after Chapman pleaded guilty to murder.

Mr Michael waited 19 years before offering it for sale while Chapman desperately mounted a legal battle to get it returned to him.

The record was bought in 1999 by an anonymous American and in 2004 it went up for sale again priced at £274,000 through a US memorabilia website, touted as ‘the most important piece of historic rock memorabilia ever’.

The album is now being offered for sale by this site, with the accompanying blurb:

The album bears the signature of John Lennon and is dated 1980. The cover and dust jacket contain forensically enhanced fingerprints of Chapman. This piece of crucial evidence against Chapman was turned into police and then returned to the owner with a letter of extreme gratitude from the District Attorney.

8 thoughts on “John Lennon Signed My Album Day He Was Killed: What’s It Worth?”