I went to a party last Friday and a pal mentioned that he had an extra ticket to see Roger Waters, asking if I’d be interested in going. I replied, “Hell yes. I’ve never seen Waters and that’s one of the things on my life’s to-do list.” I wanted to see Waters before he or I died (Waters is now 67). He handed me the ticket, and we decided that it would be best if we all just met at our seats at the United Center. For some reason, I hadn’t heard that Waters was in town, so it wasn’t until I saw a television ad for the series of shows that I realized that it would not be Waters performing his solo work, but Waters performing The Wall in its entirety as a full multimedia/theatrical production. For a second I was almost disappointed, instead hoping for an evening of Waters’ solo material, but then I figured that whatever Waters was up to, it would be worth seeing.

So Tuesday after work I walked, briefcase in hand, from my office in the Loop over to Madison Street to catch the #20 bus west for the short trip to the United Center. The bus was full of people on their way to the concert. I overheard banter among other passengers centering around a rumored surprise guest appearance by David Gilmour, but that just sounded ridiculous to me. After all, we were going to a concert, not a boxing event.

I got to my seat well ahead of my friends. This allowed me time to take in the pre-show scene in the cavernous United Center. As the crowd filed in, I realized that in addition to spending an evening with Roger Waters, I was also on a bit of an anthropological expedition. Who the hell were these people streaming into the arena? These were definitely not the hipsters who were at the Jesse Malin show at Subterranean the previous Saturday. These weren’t the people I might see at the cool people’s clubs like Schubas or The Hideout. It occurred to me that I might be among suburbanites, or people from (gasp!) the hinterlands. At 40, I was definitely in the younger half of attendees.

There were lots of people who had clearly been Pink Floyd fans back in the ’70s and ’80s. Some of their t-shirts were definitely that old. I saw more than one entire family, two or more generations, sitting together. Perhaps mom and dad were trying to share with their kids something that they had liked when they were young – I thought of a father bringing his son to his first major-league baseball game, explaining finer points of the game and details about the stadium over high-priced Cokes and hot dogs. There were also a number of people who had a head start on the evening and found it appropriate to scream out loud “Whooooooooo!” for no apparent reason and at completely random moments, the way a drunken fraternity pledge might do at his school’s first home football game of the season. Two young men, dressed in what I can only describe as gang-banger wanna-be attire, sat in the seats directly behind me and began to talk to each other in very loud voices, apparently not realizing that it isn’t necessary to yell at somebody who is seated a few inches away from oneself. I would later have to turn around and tell them to shut the fuck up.

Is there a term for what happens when other people, particularly ones that you don’t like for no reason other than you don’t think they’re sufficiently as cool as yourself, obviously see something very different in one of your favorite artists than you do, thus leading you to conclude that all of the other fans are idiots? It’s not arrogance in the traditional sense… I have always found Waters’s music to be nothing if not pensive; the polar opposite of standard-issue arena rock (never mind that we were sitting in an arena) that might lend itself to expressions of affection from the cruder end of the spectrum.

This might have been the only large-scale production show that I have ever seen where I felt reasonably sure that I knew what to expect from it. It was The Wall, a record I’ve listened to start-to-finish countless times. I’ve seen the movie more times than I can remember. I’ve seen the footage of Waters’s performance of The Wall at the Brandenburg Gate in 1990 and I figured that tonight’s show would be a variation on that. I was right. 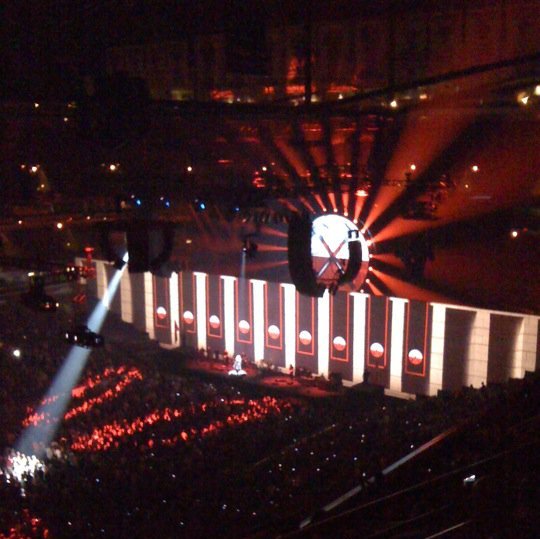 The show was more of a theatrical production than a concert. It was an artist’s work using a 20,000-seat arena for its medium. The two-tiered stage was broad, flat and a simple black. Large white bricks of The Wall were built up on the stage wings, probably a good 30 feet high, and served as screens onto which images were projected throughout the show. The back-up band was exactly that, and as the show progressed, stagehands added bricks to The Wall until the band was obscured entirely behind it. As bricks were added, they bore the images projected onto them, thus the visual experience grew as the show went on.

There were no jumbo-trons showing close-ups of Waters or any of the band members; no watching the drummer pull ghost notes out of a snare drum, no watching the lead guitarist’s fingers on the fretboard, no watching sweat drip from Waters’ brow. The work of the musicians themselves wasn’t the point. The point (and I’ll leave it to you to determine what the hell the point of The Wall is – my favorite is that it is Waters’s explanation to himself as to why he wasn’t popular in high school…) was much larger than that. From my vantage point in Section 304, in the proverbial nosebleeds, Waters was a very small figure on a very large stage.

A burst of pyrotechnics put an exclamation mark on the opening song, “In The Flesh?” A large-scale model of a German fighter plane (an ME-109?) soared over the crowd and crashed through the wall on the right side of the stage in a giant fireball. Spotlights rigged to move as if they were mounted on the undersides of helicopters ushered in “The Happiest Days of Our Lives.” 25-foot tall grotesque figures, a la the animation in the original film (perhaps the same ones used on Pink Floyd’s original The Wall tour in 1980?), graced the stage at various points. “Another Brick in the Wall, Part 2” featured a choir of school children who turned to a super-size grotesque figure of the schoolteacher and gave him what-for. And, yes, a giant inflatable pig floated over the crowd.

Images, including images of wars, animation derived from the original film, and all manner of other eye-candy, were constantly projected onto the ever-growing wall (and on the giant vertical disc behind the stage, a staple at all shows Floyd in nature). “The Thin Ice” featured an image of Waters’ father, who was killed in World War II. This was followed by an image of an American soldier, presumably in Iraq or Afghanistan, a young Middle-Eastern boy, a Muslim-looking woman, a New York City fireman; all individuals who had been killed. “Goodbye Blue Sky” featured an animated squadron of B-52 bombers, alternately spilling blood red crosses, crescents, Stars of David, the Shell Oil shell logo image, the three-pointed Mercedes-Benz stars, from their bomb bays.

Waters sang “Nobody Home” from a mock living room protruding from the side of The Wall. As “Vera” eased into “Bring the Boys Back Home” the audience was treated to images of modern war and soldiers; the audience cheered as a clip was played showing a little girl in a classroom who was surprised beyond words when her father-soldier walked into the classroom to embrace her. Moments later, in stage-wide script, this quote from President Dwight D. Eisenhower, also the subject of Waters’ recent guerilla street art efforts, splashed across The Wall:

“Every gun that is made, every warship launched, every rocket fired signifies, in the final sense, a theft from those who hunger and are not fed, those who are cold and not clothed.”

Later, “Run Like Hell,” with the band now relocated in front of The Wall, featured a chain of images in the style of recent Apple advertising campaigns; various characters wearing white earbuds and accompanying titles – sheep with iFollow; Osama Bin Laden with iTeach; Middle Eastern looking children with iLearn.

At the end of “The Trial,” the judge orders the wall to be torn down, and down it came, the big Styrofoam (?) bricks tumbling in every direction, some tumbling into the first few rows as millions of tiny flakes (snowflakes? fallout?) drifted down from the rafters. Fans in the front of the floor dutifully handed the wayward bricks to the stagehands. Waters joined his band amid the rubble to take their bows and thank everybody for paying at least $75 (in Section 304, anyway) to see his show. They walked off the stage, “Outside The Wall” played on a lone acoustic guitar as they went. And that was that.

For two and a half hours I was bombarded by music and images that at times bordered on paranoia, hope, fear, patriotism, love, hate, power, loss, greed, lust, life, death, and just about everything in between, sometimes with multiple human conditions and experiences represented in the same sounds and visual representations.

Perhaps that’s what the show was: human.