Furthur at the Auditorium Theatre

A couple of weeks ago, a buddy of mine emailed me: “This is it. This is the one.” The subject line was “Furthur.” He had just seen them play. Like me, he’s a little obsessed with this stuff. He goes to see the post Grateful Dead bands when he can, like I do, and goes to see the new kids on the block, too – Umphrey’s McGee, moe., etc. Since that email I’ve read similar comments in forums where like minded people congregate. On Tuesday, March 2, 2010, I got to see Furthur for the first of a two night run at the Auditorium Theatre in Chicago – a theater steeped in Grateful Dead history. It was everything that I’d hoped it would be. Just a tremendous show. If you get the opportunity, go see a Furthur show this year. You won’t be disappointed.

Furthur is the latest incarnation of the post Grateful Dead bands. Phil Lesh (bass, vocals) and Bob Weir (guitar, vocals) are the original members. Joining them are Jeff Chimenti (keys) and Jay Lane (percussion) from RatDog, John Kadlecik (guitar, vocals) from Dark Star Orchestra, and Joe Russo (drums). Joe Russo is the only musician of the bunch I hadn’t previously seen, but from this viewing, he’s got it down. There are also two back up singers.

The Auditorium Theatre in Chicago: What a great venue. The Grateful Dead did a 4 day run here in 1976. A few other times, too, I think. A beautiful theater with great acoustics, comfy seats, and good sight lines all around. Security was friendly, only really at the doors, and inside the venue it was just volunteers helping people find their seat. Which is always preferable. 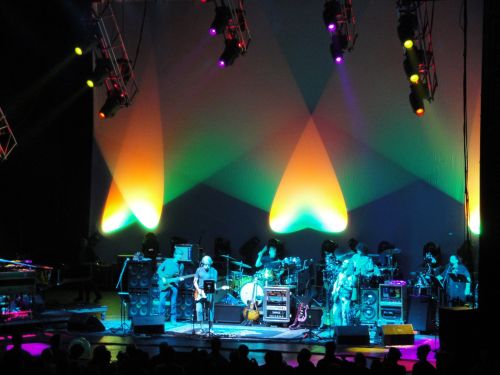 The show got off to a strong start with Feel Like a Stranger. This is one of my favorite Weir/Barlow songs. The Dead first started playing it in 1980, and it’s got some funk to it. And lyrically, it speaks directly to the crowd and the evening’s festivities: “It’s going to be a long, long, crazy, crazy night.” Everybody goes crazy for that line. It’s how you want to start a Grateful Dead concert. Well, a post Grateful Dead, Furthur concert, in his case. “Well you know it’s gonna get stranger, so let’s get on with the show.” You said it, Bobby.

Next was New Minglewood Blues, a cover Weir has been playing for ages, with great, boisterous blues lyrics: “I was born in a desert, raised in a lion’s den,” and my favorite, “A couple more shots of whiskey, those Chicago phillies start looking good.” Substitute whatever city they’re playing in for Chicago, and you get the picture.

Loose Lucy was next, a song the Dead retired for 16 years, but brought back in the later days. This song gets a lot of play in the post Dead world. I saw it played a half dozen times last year, too. The good news is it’s a helluva lot of fun.

Then Kadlecik ably tackled the vocals for Hurricane, the evening’s Dylan cover. This was a surprise. It’s the first time I’ve heard of a post Dead band playing Hurricane. It’s a great Dylan song. I first heard it when I was eighteen, in a college dorm room… and it changed me forever. Lyrically, it’s melodically complex and dense. Typical of Dylan, especially from the record Hurricane is on, Desire. Kadlecik does an admirable job of keeping up with the lyrics. Not a Dylan song that many cover, probably for that reason.

A couple of other highlights: Dear Mr. Fantasy was a great jam, and a nice surprise for me. Kadlecik and Weir shared vocals on this one.

New Speedway Boogie. A dark, brooding jam about Altamont. Which it always makes me think of. So I spent some time contemplating Altamont at the show. Just a few seconds, but still… “one way or another, something’s got to give.” Shared vocal again. Even Phil took a turn.

Shakedown Street: “I recall your darkness, when it crackled like a thundercloud.” Chimenti, Lesh, and Kadlecik made this thing smoke.

My only critique of the band is that Lane should be behind a full kit. Having seen RatDog more than a half dozen times in the past 18 months, I’ve come to really appreciate what a great drummer he is. I kept looking at him behind his percussion set and thinking he should be working with Russo behind a full kit. Maybe that’s just me. Phil and Bobby seemed really energized to be on stage together again and with this band. Kadlecik plays well with them, Chimenti is really an old hand at this point – he’s been touring with RatDog for years, and toured with The Dead last spring/summer. And the back up vocalists add a really nice touch.

Phil turned 70 on March 15. 70! Furthur did a show to celebrate Phil’s birthday this past Friday, March 12, at the Bill Graham Civic Auditorium in San Francisco. It was billed as “Furthur & Friends,” and there were special guests. It was awesome – a long, long, crazy, crazy night. Over 6 hours of music! With a few special guests. Look back here for a review next week.

2 thoughts on “Taking it further: Furthur in Chicago”