The Sinatras perform “She Said She Said” and “I’m Neil Young” at Access Vision Studios. April of 1992, Battle Creek, Michigan.

This was the era when the Sinatras first blew my mind. You can see from this video exactly why Twin/Tone expressed an interest in them; they would’ve fit in perfectly there. They were so great, and they deserve far more recognition than they’ve ever received. If you’re not familiar with these guys you can read our big, long feature from 2006: The Sinatras: Kinda Like Love. And you should definitely check out their album, Life in Flames, finally released in 2009 after being tinkered with for more than a decade. 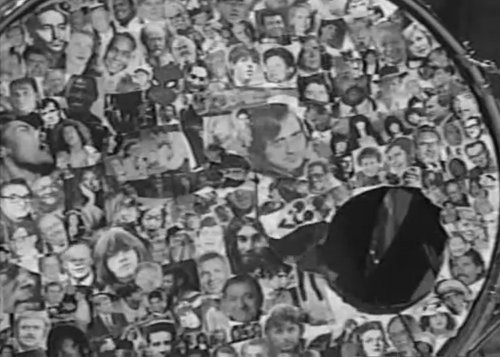 I spy Brian Jones, Gerald R. Ford, Paul McCartney, Captain Kangaroo… Who else do you see?

4 thoughts on “The Sinatras – She Said I’m Neil Young”