At first glance I was skeptical about the Creators Project. “How phony,” I thought to myself as I read about it. Who is deciding who the “leading artists across the world who are pushing creative boundaries through technology” even are? I frankly had a bit of 1984 nerves: “Are they going to watch me dance? Are they going to watch me as I look at the art instillations? Who will even be watching me?” No. No. No. I felt none one of that.

There are very few moments where one feels like they are taking part in the creation of culture. Submerged in the annals of our memories are stockpiles of stories passed down through film and family where cultural exchange and art weren’t realized from the ventricle-like device you carry around viciously typing away at, but instead sitting next to your friend, stoned in a basement, lava lamp ablaze. Or if you were lucky enough to be in it you found out through showing up, always showing up; without flip-cams, but with coke. Though, my blackberry was attached to my hand and I tweeted about my friend and she me as we danced the night away side-by-side, there was an organic aspect to the night and I felt a part of the vintage cultural attaché we have all romanticized so. 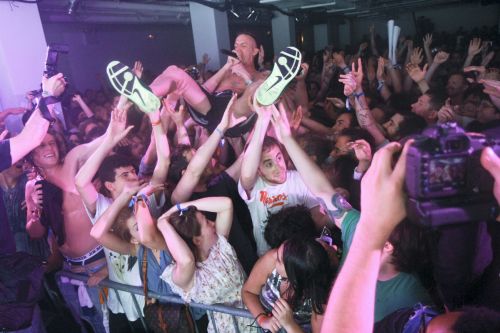 When I first walked into the 80,000 square-foot storied Milk Studios (after securing my pre-mixed cocktail), I did a lap around the first floor labyrinth, danced briefly to awesome tunes spun by XXXChange and headed upstairs to witness Mark Ronson‘s “Song Writing Panel” where he (and Sam Spiegl) created a song in real time. In an ideal world I’d feel completely comfortable wholeheartedly using the experience of watching Ronson—with his status as a premier cultural architect—creating a song right in front of my face as a metaphor for the night but I actually kind of thought it was a bit of a bore. As I walked out I turned back, finally hearing the poppy infused soul sound he’s best known for come together. A little Metaphor? Mostly, check!

The night of creation and discovery continued when I encountered the energetic first-ever New York performance by newly formed Die Antwoord, a three-piece rap group from Cape Town, South Africa consisting of Ninja; Yo-Landi Vi$$er and DJ Hi-Tek. Their jocular sound blared forceful rhymes over ranged and warring but contiguous beats that manipulated the strangest dance moves from people. Though their sound is gimmicky and sometimes made me think more the Offspring than Bowie (ultimate culture creator) there was enough Afrikaans, lightheartedness and a certain alchemy formed with the influence of Landi Vi$$er’s spunky but airy tone that made me realize just why they were present and considered. Drink in hand I danced a la Elaine from “Seinfeld” and felt totally fine about it.

My sweaty, exhilarating night of human-on-human discovery reached a pinnacle when a secret performance by M.I.A. materialized. I worked my way past the funny, recurring (first they’d been fighting, then making out) gold and black pattern matching couple, the woman-half atop the man-half shoulders but still couldn’t manage a glimpse of anything but M.I.A.’s rainbow wig. Either the stage was really low or hipsters, with their good ol’ Midwestern hearty cultivation were super tall. 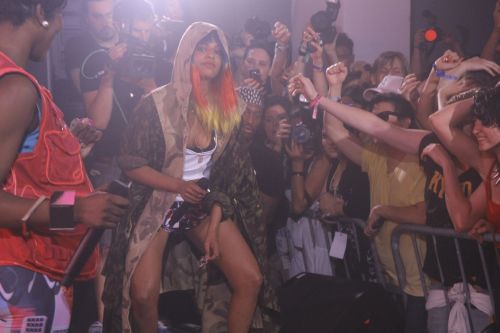 But I didn’t care, seeing her didn’t seem to matter. The energy of the crowd and M.I.A.’s bigger than life presence left me, one of the most jaded New Yorkers of all time, smiling sincerely from ear to ear (and sweating everywhere else), and as I danced with perfect strangers to pop favorite “Paper Planes” I felt every bit a part of the fabled and normally arcane culture creation.

4 thoughts on “What I Learned at Culture Creating School Today”