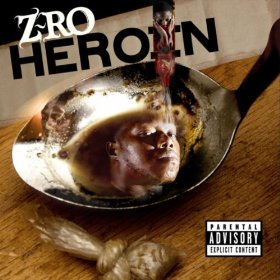 Sometimes the universe drops something completely unexpected in your lap. Sometimes that’s a good thing, sometimes it’s not. I recently decided to check out all the 2010 hip hop releases that my public library had.

My intention was to get a sense of the state of hip hop today by exploring the library’s collection. I couldn’t afford to buy dozens of CDs, and I wouldn’t have known where to begin. What I got, though, was a glimpse of one of the greatest rappers I’ve ever heard, Z-Ro, a man who has released a dozen albums in as many years, but is still an underground voice outside of Houston, TX.

Heroin is the third in a trilogy of drug records, with Cocaine (2009) and Crack (2008) preceding it. I picked up Cocaine after I discovered Heroin, and it’s a great album as well. The weird thing is that they share two songs, but with different names on both albums. “We Don’t Speed” is “Tha Police” on Cocaine, and “Shotta” is “Move Ya Body” on Heroin.

“Never Let Go” kicks off Heroin with a big, dark funk. The production grabbed me right away and got me thinking of Dr. Dre. Z-Ro has a very arresting bass voice, and I love his flow. His rhymes are hard, pained, real. Depressed, not depressing.

The album features choruses you might find yourself singing. Which would be bad, because they tend to be a bit foul. “Do Bad on My Own” is a brilliant song with a poignant chorus that has Z-Ro doing the harmonies, layered one on top of the other.

“Real or Fake” announces itself big and heavy with a great synth and guitar intro. Dripping with deep, dirty southern funk. Then Mike D (not the Beastie Boy) practically steals the song from Z-Ro with his verse.

“We Don’t Speed” is a gripping rap about getting pulled over by a cop. “Man, it’s just weed, you trippin’!” This verse is worth a read:

Since Barack Obama became the first black President,
The police have been waging war against the black resident.
Racial profiling is at an all time high.
We represent 10% of the population,
But 65% of the jail population, and I can’t tell you why.
A lot of us are guilty as charged, and as much as I hate to say it,
Some brothers deserve to be behind bars –
You know the ones who beat on women, and the murderers, and the rapists,
and especially the ones that kidnap and even abandon babies.

Intense, right? An interesting angle on a fairly common topic in hip hop. When Z-Ro raps about himself, he’s starkly honest. He makes me like him, flaws and all. I’ve listened to a lot of new hip hop albums over these past few months, and Heroin is the best of the bunch. I’m going to start working through more of his back catalog next.