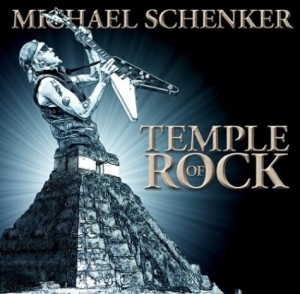 Not only is Michael Schenker one of the greatest hard rock guitarists ever, he’s one of the most frustrating.

Two or my all time favorite guitar players have played in the Scorpions-younger brother Michael and his replacement Uli Jon Roth-but it’s Schenker’s work in UFO where he destroys so consistently.

From there, his popularity led him to a solo career which started promisingly enough before becoming labored with volatile drinking issues and egotistical clashes with a revolving door personnel that seemed to change with each record.

It’ll make you do a double take, especially when you discover it’s none other than William Shatner doing the little spoken word into to Temple Of Rock, only until you start listening to the nonsense they have him reading.

Rudy Schenker, Leslie West, Carmine Appice, Chris Slade and an endless parade of hard rock guests show up, but it’s the guest vocalist Doogie White who ends up stealing the spotlight when it comes to real contribution.

He only appears on one song, “Before The Devil Knows Your Dead,” and that’s a shame.

Inexplicably, Schenker gives the majority of the vocals on the record to Michael Voss who possesses a flaccid vocal tonality and renders the album as nothing more than an irritant. His limited ability magnifies the album’s other huge flaw: the woefully clichéd lyrics.

What’s bewildering is how Schenker works mindblowing solos in between all of the shit sandwiches and formulaic prose. It’s during these moments when Schenker still shows signs of previous greatness and it hints that he may be nothing more than a six-string savant with flashes of technical brilliant, but with nothing in terms of the social skills needed to share the stage with a complimentary partner.

Temple Of Rock acts like it’s still 1987 and it’s attitude mines the possibility that it can compete with Giuffria or some other second-tier hair metal band trying to break out of MTV’s light rotation.

While the record seems content with that very low expectation, Schenker compellingly finds this schlock as a good enough reason to play against. It’s a very frustrating experience, which means that Temple Of Rock is just business as usual for this could-have been shredder contender.