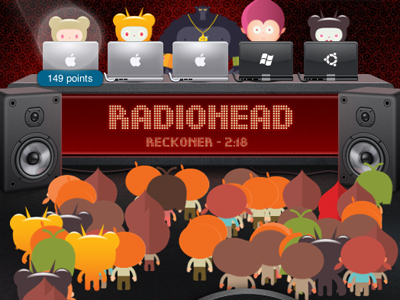 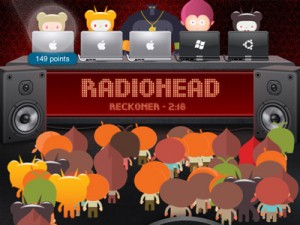 There was a time when a number of the original GLONO posse lived close to each other, or at least within easy driving distance. Even before the advent of GLONO we gathered together to drink, argue and play music—which caused more drinking and more arguing. We called them record parties and we had them often…until we all started moving away.

Since then we’d all at one point or another tried to recreate the record party via digital means. We created mixes and shared them to argue over via email (and eventually right here on GLONO); we had late night drunken phone calls; we even tried Skype. Nothing compared. We didn’t have the ability to listen to music and argue about it in real-time. We lost the community aspect.

Turntable has changed all of that.

If you’re on this site and you haven’t tried Turntable.fm, you are missing an entire world of awesome. The basic gist is that you have chat rooms that allow you to search and play music that you and your friends can hear and comment on at the same time. Yes, there’s a competitive angle to it in that points you rack up on your DJ skills unlock increasingly ridiculous avatars, but the real beauty is the interaction and community. Finally, we can indulge our music geekiness by one-upping our friends with the perfect follow-up song. And therein lies the danger.

Like all group settings and social media platforms, Turntable.fm has its own unique social cues and lingo and accepted behaviors, which provide even more opportunities to argue. For instance, the GLONO crew is decidedly split on the meaning and etiquette for awarding points to a song. The options are simple: Awesome or Lame. The more songs you play that are deemed Awesome the more points you accumulate. Too many Lame votes and your song is skipped. It is my position that one should only award Awesome points to those songs that are truly awesome; be that as a reflection on the song itself or its use within the playlist. For instance, it may be  entirely appropriate to award an Awesome point to “Sister Christian,” which is definitely LAME, if used in the context of “Obnoxious 80s Hardrock” or “Uncomfortable movie scenes.” I do not subscribe to the idea that you always Awesome your friends’ picks or you Awesome anything you don’t absolutely hate. Doing that just rewards bad behavior…or worse, bad taste! Alas, there are detractors and that’s part of the fun. We will argue the point and then try to spin songs that support our respective positions.

Regardless, Turntable.fm provides the digital platform we’ve been dreaming of and allows my friends and I to once again engage in the activities that brought us together as a posse in the first place. It’s a digital record party and as long as The Man doesn’t shut it down, we’ll be in attendance. You should join us.

Log into the GLONO room to spin your favorite tunes with us. We’re not all there all the time, but someone’s there a lot of the time.