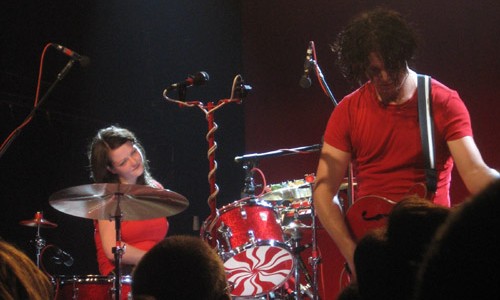 It’s over. According to an announcement on their website, Jack and Meg White “will make no further new recordings or perform live” together as the White Stripes.

I’ve always felt a connection between the band and this web site. We have similar roots, being from Michigan and digging the sixties garage rock scene. GLONO’s first bit of national exposure came when we sent Jeff Sabatini to the Coleman A. Young Municipal Center in downtown Detroit in May 2002 with $15 to purchase an official copy of Jack and Meg’s 1996 marriage license. We were the first place to publish that document online.

But that wasn’t the first time we had covered the band. Johnny Loftus caught them at the Empty Bottle way back in July 2001, and we’ve kept tabs on them ever since.

“The reason is not due to artistic differences or lack of wanting to continue, nor any health issues as both Meg and Jack are feeling fine and in good health. It’s for a myriad of reasons, but mostly to preserve what is beautiful and special about the band and have it stay that way.”

That statement from the official announcement reveals a lot of what I love about Jack White. He gives a shit about rock and roll. In fact, he’s downright romantic about it. And we need that. We need a lot more of it, actually.

Jack might be goofy and gimmicky, but I respect the way he attempts to make things special and unique. He has an intrinsic sense of showmanship. And this is show business after all. So why not have a little fun with it?

One of the fundamental tenets of show biz is to keep ’em wanting more. And calling it quits while people still care is a smart move. As the announcement says, “Third Man Records will continue to put out unreleased live and studio recordings from the White Stripes.” So it’s not like they’re killing the goose. If you want to be cynical about it, just imagine how much they’ll rake in on the inevitable reunion tour in 2019.

But now is not the time to be cynical. Now we should be thankful to Jack and Meg for creating as much good music together as they did, and for shining a spotlight on a region and style(s) of music that had been widely ignored before the White Stripes got famous.

Do you remember seeing “Fell in Love with a Girl” on MTV and thinking, How the hell did they trick someone into playing this on the air? It seemed like a novelty song with a quirky little video compared to everything else in the mainstream at the time. White Blood Cells was a great album, but surely that was just a fluke.

Then came “Seven Nation Army” and all of a sudden they were the biggest band in the world. It was just so weird. Bands that are opening up for other bands at the Gold Dollar in Detroit one day just don’t get played on Top 40 radio stations a few years later. It just doesn’t happen.

Well, it doesn’t. But it did. And things were pretty exciting for a while there. And let’s face it, things have been considerably less exciting in the rock and roll world since the White Stripes released their final album, Icky Thump, in 2007. Or maybe it’s just me. Who knows?

But man, I’m really glad I got to see them at the Metro in Chicago back in the day. I remember watching Meg stare at Jack while they played and thinking, Damn, if they really were brother-and-sister this would be creepy! There was a chemistry between them like nothing I’ve ever seen in a show. Sparks were flying. It was something else.

So it’s a drag that people won’t be able to see that anymore, but I’m glad they’re going out before they lose those sparks, that chemistry, that magic.

The White Stripes would like to announce that today, February 2nd, 2011, their band has officially ended and will make no further new recordings or perform live.

The reason is not due to artistic differences or lack of wanting to continue, nor any health issues as both Meg and Jack are feeling fine and in good health.

It is for a myriad of reasons, but mostly to preserve What is beautiful and special about the band and have it stay that way.

Meg and Jack want to thank every one of their fans and admirers for the incredible support they have given throughout the 13 plus years of the White Stripes’ intense and incredible career.

Third Man Records will continue to put out unreleased live and studio recordings from The White Stripes in their Vault Subscription record club, as well as through regular channels.

Both Meg and Jack hope this decision isn’t met with sorrow by their fans but that it is seen as a positive move done out of respect for the art and music that the band has created. It is also done with the utmost respect to those fans who’ve shared in those creations, with their feelings considered greatly.

With that in mind the band have this to say:

“The White Stripes do not belong to Meg and Jack anymore. The White Stripes belong to you now and you can do with it whatever you want. The beauty of art and music is that it can last forever if people want it to. Thank you for sharing this experience. Your involvement will never be lost on us and we are truly grateful.”

13 thoughts on “The White Stripes: The Last Great Band”