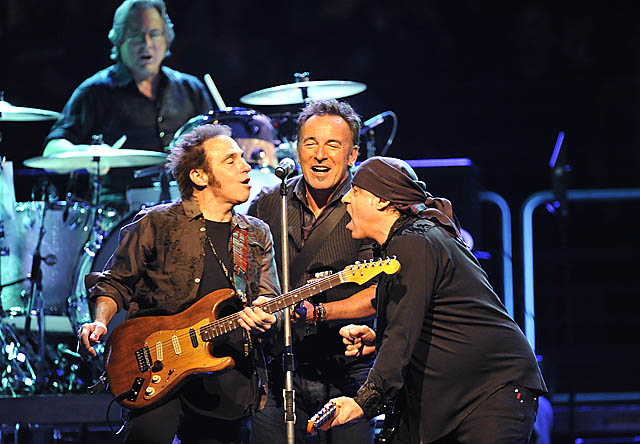 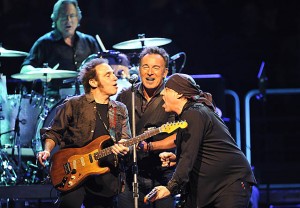 Last night Sab and I and several thousand other people saw Bruce Springsteen and the E Street Band at the Palace of Auburn Hills, in suburban Detroit.

Sab has seen Springsteen on a number of occasions.  Something like seven.  I’ve never seen him before.  Sab is going to write something breaking down the show.  He’s got a whole lot of reference to do so.  And seeing the show in his company was good, in that when he wasn’t whooping, shouting and screaming, he explained what album this song appeared on or when he’d heard this other song at another show.

For me, it was about seeing an American rock and roll icon more than anything else.  I was happiest listening to Nils Lofgren playing; his solo on “Youngstown” (“That’s an acoustic song on the disc,” Sab explained to me after the guitar shredded out note after note in a remarkable display of capability; Little Steven may get the attention, but Lofgren has the chops) was nothing short of show-stopping.

One aspect that seemed somewhat unsettling was that Springsteen, who had misidentified where he was the last time he played Detroit (Cleveland?!), emphasized that he knew where he was from the start, and after opening with the anthem-like “We Take Care Of Our Own,” the sort of lyric that Kid Rock might produce, launched into “Wrecking Ball,” “Badlands,” “Death to My Hometown,” and “My City of Ruins.”

Meanwhile, back in the offices of the mayor of Detroit, the real possibility that the city could be taken over by a state-appointed emergency financial manager continues.

A little musical municipal uplift would have been nice for the denizens of Detroit.  That run of songs was like something Christopher Nolan might have been listening to when he reimagined Gotham City.

He did give a vigorous nod to the importance of Motown music to his career (and arguably to that of a multitude of other acts), and they launched into the Temptation’s “The Way You Do the Things You Do,” which was written by Smokey Robinson and Bobby Rogers of The Miracles.  (I am more of a partisan of Eddie Kendricks’ vocal stylings on that than Bruce’s rougher handling.)  Oddly, that segued into “634-5789,” which was originally performed by “Wicked” Wilson Pickett, who was not a Motown artist.  C’mon: the Motown songbook certainly has more than a sufficient number of compositions that could have followed.

Be that as it may, it was a worthwhile experience.  Springsteen and his band are rare performers, people who are unabashedly about rock and roll, who are continuing to produce new music that is fresh and relevant, not pale imitations of what had gone before or the sort of mellowed-down pap that things like “American Idol” and “Glee” have led the listening public to adore.

One thought on “A Few Words About Springsteen”