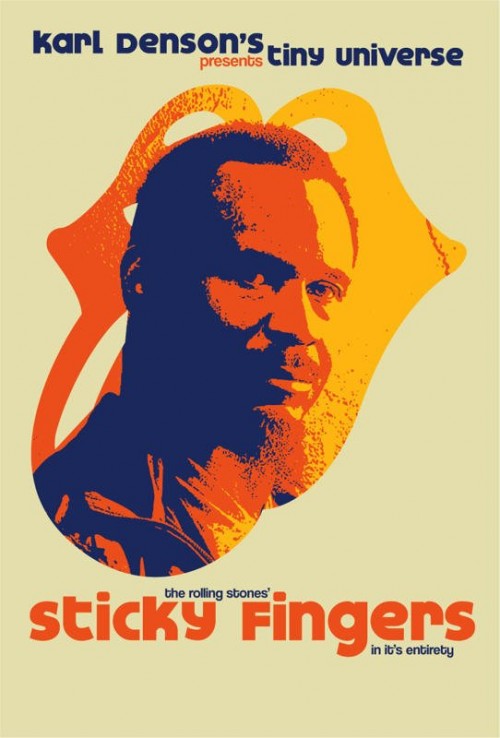 I don’t remember exactly when it was, but sometime early in 2011, Karl Denson asked his Facebook fans a pressing question: What album should Karl Denson’s Tiny Universe (KDTU) perform in its entirety on its next tour? I remember I submitted a suggestion. I think it was Bill Wither‘s Just As I Am, but don’t quote me on that.

Someone else, though, had the brilliant idea to suggest The Rolling Stones‘ Sticky Fingers. In order to do it right, KDTU recruited Anders Osborne, a Swedish singer/songwriter and guitar player via New Orleans, to help present the record in all its fullness. Typically, they will play a set of KDTU songs, then bring Osborne out for the Sticky Fingers set. Sometimes, they had Osborne open up with his own set as well. I trolled through the various audience recordings of Sticky Fingers shows from late 2011 and early 2012, and my gut and ears tell me this show is the one to listen to:

Each of the tracks below are pulled from the Pittsburgh, PA show. Enjoy!

1. Karl Denson’s Tiny Universe – “Brown Sugar” “This first song… is about interracial sex!” So sayeth Karl Denson at the beginning of this track. Which makes me think that when my parents named one of our dogs Brown Sugar, that may have been an inappropriate use of the song name.

2. Karl Denson’s Tiny Universe – “Wild Horses” This may be my all time favorite Rolling Stones song. Keith Richards could write some songs back in the day… Nicely executed here.

3. Karl Denson’s Tiny Universe – “Can’t You Hear Me Knockin'” Whenever I hear the original by the Stones, I think of Scorsese’s Casino. We’ve even highlighted another cover version of this song (by Umphrey’s McGee) on Five From the Archive before. If you’re feeling really nerdy today, you can compare the two.

4. Karl Denson’s Tiny Universe – “Bitch” I love this song. All covered in grit and sweat.

5. Karl Denson’s Tiny Universe – “Dead Flowers” So many great tracks on this record, and this is one of them. Ever heard Townes Van Zandt do this on his Roadsongs album? Just stunningly great.