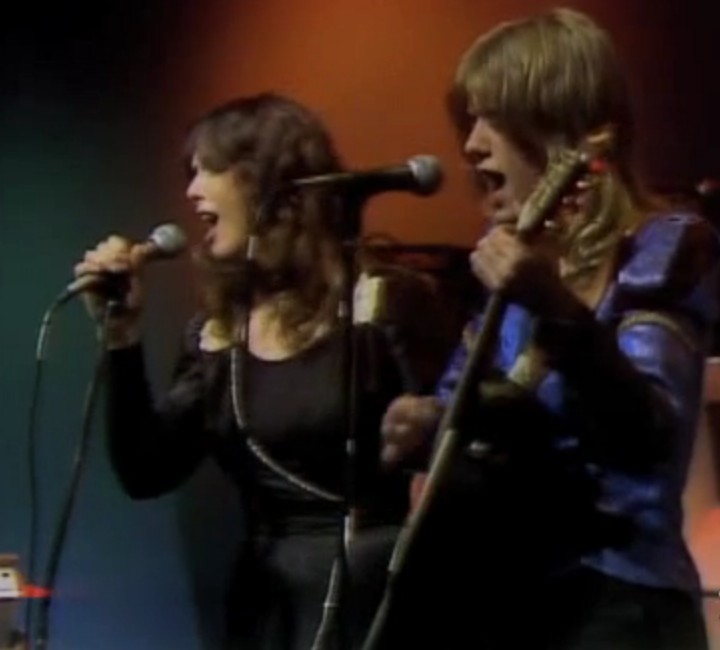 Holy shit, you’ve got to watch this clip from a 1976 Northwest Public Television show. It’s included in a new box set, Strange Euphoria, out tomorrow. Rolling Stone says it features “three CDs of never-before-heard demos and rarities, plus a DVD of a rare TV performance, The Second Ending – Featuring Heart,” and that’s where this amazing live version of “Crazy On You” comes from.

There’s a moment about a minute into this where Nancy Wilson flicks off her thumb pick and pulls a flat pick out of her bra that’s the most bad ass rock move I’ve ever seen any guitarist do in my life. So effortlessly cool.

Try not to be distracted by the bass player’s corset/vest/nipples issue or the guitar player’s satin superhero hot pants and just focus on the Wilson sisters. Even in long-sleeved floor-length dresses, they exude so much scary sex appeal it boggles the mind. My mind is boggled. “Crazy On You” has always had a spooky vibe, those synth strings adding a menacing aura of the occult. And that pre-chorus part with the wordless harmonies (“Ahh ahh ahh ahh!”) that culminates with the scream? Pure evil, pure ecstasy.

It’s every guy’s obvious fantasy to find a woman who just wants to go crazy on him. When I used to ride my bike home from my pal’s house in junior high, I used to dream that the Flanigan girls would drive by and pick me up and take me back to their house by the river and go crazy on me. (Never happened.) I’ve probably listened to this song a thousand times but I never really noticed how heavy the lyrics are. The message is simple but intense: “The whole world is insane, we’re all doomed, let’s fuck.”

With bombs and the devil, and the kids keep coming
No way to breathe easy, no time to be young
But I tell myself that I’m doing all right
There’s nothing left to do at night but to go crazy on you

But the lyrics never even come close to being vulgar. Which makes it even sexier. Everything dirty is implied in the music and by way of the incredible voice of Ann Wilson. It’s actually romantic with hints of Wiccan naturalism.

My love is the evening breeze touching your skin
The gentle, sweet singing of leaves in the wind
The whisper that calls after you in the night
And kisses your ear in the early moonlight

I also love the fact that she wants to make sure that her partner isn’t feeling insecure with all the craziness being foisted upon him:

And you don’t need to wonder, you’re doing fine
My love, the pleasure’s mine
Let me go crazy on ya

You’re doing fine! Gee, thanks! Sex-positive feminism in 1976. The Wilson sisters were revolutionary! And they fucking rocked.

Be sure to read Jessica Hopper’s recent interview with Ann Wilson for Rolling Stone.

Hat tip to John Darnielle who turned me on to this video, tweeting “next time I get asked about my influences I’m just gonna link this because it’s about 80% of ’em.”