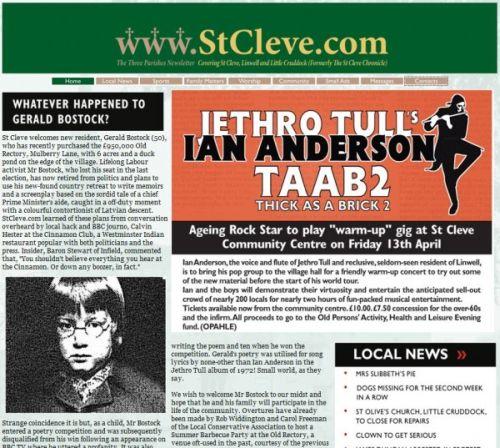 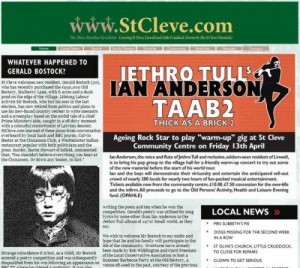 Does the world really care what happened to Gerald Bostock?

I certainly don’t, but then again, I’m not a fan of Jethro Tull. Familiar with the band, yes. In fact, among the few rock albums that made an impression on me as a kid was the original Thick As A Brick, which my father had purchased on 8-track for some odd reason. Fascinated as I was by 8-tracks (as I was not allowed to touch dad’s record player without supervision) this album made its impact on my pre-adolescent mind primarily for its odd pairing of the flute with screaming electric guitars, which even then I was positive was not a legitimate use of said instruments. Dad had plenty of jazz records and tapes (including some Herbie Mann), and I was of the opinion that the flutes belonged on those recordings, an attitude I must admit to still embracing, at least in the context of Jethro Tull. More guitar, less flute, and certainly the minimum of Ian Anderson’s over-enunciated vocals makes for better Tull.

I recognize that said opinion is not likely to be shared by most, and raises the question of why someone prejudiced against Mr. Anderson would bother taking on the task of reviewing a solo release by the aforementioned flautist. Because, frankly, I’m sick of baby boomers, their fawning nostalgia, and all the other ways they continue to live in a mass state of delusion about the world and their place within it.

But before we get to all that, let’s take a moment for the briefest analysis of the music. What made the original Thick As A Brick such a classic was Martin Barre’s guitar playing. The original just plain rocks in a way that’s enveloping enough that you can ignore all the silliness and flute-work. But Barre does not play on Thick As A Brick 2 and the guitars are played down in Anderson’s solo work. The flute and vocals, on the other hand, ride high in the mix of TAAB 2, which sounds like a thoroughly modern recording, bright and polished. “Digital,” if you will. While there are still some rocking sections of TAAB 2, there aren’t enough of them to overshadow the narrative interludes, in which Anderson comes off sounding like a particularly annoying linguistics professor.

But the best reason to dislike TAAB 2 isn’t the music, it’s the way this whole project is mired in a sentimental conceit. Thick As A Brick is a 40-year-old album, released in 1972 when Anderson was still in his mid-20s. He’s a senior citizen now – Living In The Past, indeed! While I don’t begrudge him for trying to cash in on his legacy by recording this unimaginative sequel, I do despise his fans for putting him in this position. Because it’s pretty clear that most classic rock artists who didn’t die before they got old see a much more lucrative future in turning back the clock than turning out anything new.

While there are classic rockers who continue to release new music that’s actually new – see Neil Young and Bruce Springsteen – this wave of dusting off classics we’ve been drowning in recently needs to be stopped before we see Tommy 2 or Really Close to the Edge. Yes, it’s easy to get excited when a great band announces it will play a classic album in its entirety at a special concert or that a favorite artist is headed back into the studio to “rediscover” an older and less mature sound, but there’s also something downright mean about expecting a musician to stay fixed in time. Unless, of course, you lead your own life oblivious to the changes time has wrought.