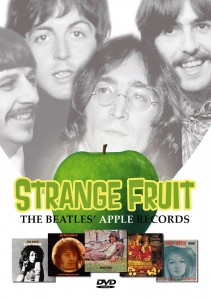 As record companies become less and less relevant in today’s digital age, the story of The Beatles’ own foray into the record business stands to risk its own extinction. While it is exciting to watch the industry transform back into a singles-based culture with the gap between musician and audience shortening, it’s easy to forget that record labels at one time were a vital chain in the music industry.

The Beatles were one of the first bands who were keenly aware of this power, watching themselves become delegated to the sidelines when it came to matters of their label, Parlophone in the U.K. and Capitol here in the States.

The discord was so great that the band not only set about creating their own label as soon as their existing contracts ran out, they also set about changing the very idea of what a record company could be. From their perspective, most of the bigger labels of the day were filled with tenured music folks who had no real reason to change. But to the younger artists, they were seen as roadblocks to creative will, challenging everything including the very manner in which their music was recorded.

There would be none of that within Apple Records.

The Beatles invested themselves into this new record label that would change all of this. Not only would the new venture find certain success with any Beatles related product that was released, it would also find a curious pattern to the band member’s personal stamp of approval to any project that they brought to fruition. They resembled their own tastes, for sure, but the releases also mirrored the member’s own worldview.

Strange Fruit: The Beatles’ Apple Records documents the life cycle of the Fab 4’s project. From Apple Records’  Utopian beginnings to its obligatory legal scavenging in the mid-70s, this documentary–made without the band’s consent–details the curious story of the label that turned out to be so much more than the boutique created by ego and fame. Instead, it was a label created with more good intention than business acumen.

As a kid, I associated Apple Records with the Beatles, or their solo counterparts. I remember Ringo’s “Back Off Boogaloo” had a blue apple while my copy of Let It Be came with a Red Delicious label.

It wasn’t until I got Badfinger’s Straight Up album that I became aware of other artists besides the Beatles that were also housed on the Apple label. Years later when I became fully enthralled with Beatlemania I discovered the full lengths of what the label actually was, and even then I’m sure I didn’t have a full appreciation of what they were trying to achieve.

Strange Fruit gives novices and even well read fans a comprehensive overview of their initial forays into the record industry with personal antidotes from some of the label’s first signings.

As expected, John’s first projects involved Yoko Ono, including their infamous Two Virgins release as well as their subsequent Wedding Album complete with a copy of John and Yoko’s marriage certificate, a booklet, and even a photo of the couple’s wedding cake.

Lennon was also responsible for signing David Peel, as well as coordinating a release for Elephant Memory, his backing band for Sometime In New York City release. It’s obvious that Lennon’s choices were music of the street and an aural diary of his new home, New York City.

However, he deferred much of his focus on Apple to making sure Yoko Ono was provided the best of everything when it came time for her annual releases. The label executives, placed at the behest of the band, were very aware that they were to spare no expense when it came to a new Yoko Ono record, even when the accountants couldn’t help notice that she was one of the lowest selling artists on the roster.

Strange Fruit hints at this and to this day, even the artists that may have suffered from the lack of budget tread quietly on the Yoko word. Listening to some of these less notable artists, you begin to formulate your own opinion if an extra advertising budget would even make much of an impact on sales.

You also get the sense that these bands were at the mercy of the Beatles themselves, whose flight of fancy could spell the end of other artists careers whenever the novelty of being an A&R executive ran out.

Ringo’s attention was the most brief, kicking off the label’s first release: a one copy only release of “The Lady Is A Champ” re-titled “Maureen Is A Champ,” a birthday present from Ringo to his wife for her 21st birthday. The record was never officially released to the public and aside from a few singles the Beatle drummer coaxed along the way early on, his true passion seemed to be with films, both behind and in front of the camera.

If one were to gauge the commercial success of the Beatles’ own stable, you’d have to acknowledge McCartney’s out of the gate smash of Mary Hopkin’s “Those Were The Days.” McCartney found the song, an old Russian standard, being used in a film, fell in love with it. He paired a young Welsh girl with the song that kept circling his head, and the result was the second release in Apple’s catalog and a worldwide smash.

McCartney also provided one of his songs to members of The Ivey’s, a Welsh band that Beatle roadie Mal Evans thought the world of, to the point where he approached nearly every Beatle to okay their signing. He got a receptive ear from Paul, who handed the band his demo for “Come And Get It” with firm instructions to not change a thing when re-doing it. They didn’t. And with a quick name change to Badfinger, they found “Come And Get It” as their first worldwide hit.

It was George Harrison who found the most fertile ground with Apple Records, taking every opportunity to find talent that may not have been the most commercially viable, but instead, the most spiritually satisfying. He was first tallied with the responsibility finding an outlet for Jackie Lomax, actually one of Brian Epstein’s findings who was well known locally. When Epstein committed suicide in 1967, Lomax found all of his good fortunes suddenly slipping away. Harrison put his hand in the ring and turned Lomax’s debut album into a pet project, calling up other Beatles and other famous friends to help fill out the arrangement.

The sound was not the same as Lomax’s versions, but when you’re being directed by a Beatle and he hands over your first “hit,” a strangely arranged song called “Sour Milk Sea,” you don’t refuse it even when it sounds like nothing that would make its way up the charts.

He coordinated the Radha Krishna Temple recording including the infamous “Hare Krishna Mantra” that progressively minded FM stations around the world would play on occasion in their free-format playlists.

George worked with Ravi Shankar for the Concert For Bangladesh and even released a live Shankar album shortly afterward but it wasn’t before he too lost interest, intrusting the few remaining items on his plate to be completed by longtime friend Klaus Voormann.

Not only were the funds of Apple Records’ budget becoming increasingly drained, but so were the creative forces behind it.

One of the most notable Apple Records’ releases was the solo debut effort by James Taylor. Since Peter Asher’s first chart entry as Peter and Gordon composed by his sister’s boyfriend, Paul McCartney, his ties to the band were strong enough that he became one of Apple Record’s first A&R men.

Asher’s first discovery was Taylor, and he managed to get a good size promotional budget for his debut release. It sold well, but not at the levels that Asher achieved with other labels when he took Taylor’s contract as part of his own resignation.

And The Beatles were not very business-minded at all, shoring up their own deficiencies with such sharks like Alan Klein who could see nothing in the Utopian blueprint that the Beatles dreamed except a never-ending way to bleed all of those poor hippie schmucks all the way to bank.

Even without much on the label’s legal story, Strange Fruit remains a very calm, collected, and somewhat long-winded documentary. The interviews are somewhat relevant, but they contain none of the history divulging tales that would make this documentary a vital artifact.

It’s best appreciated by Beatlemaniacs who want a glimpse into the Beatles’ entrepreneurial spirit built on a wonderful platform of whimsy and good intentions.

But even inside those good intentions was a project both naïve and poorly executed. Strange Fruit does not hold back at these unflattering moments, but instead it forgives it all with the same rose colored lenses that only a true fan would use.

Everyone seems to acknowledge the folly of the whole thing with an almost youthful shrug. It suggests that it was a learning model for sure, but during the brief moment it shined, Apple Records sounded like the not only the place to work, but also just the place to be.