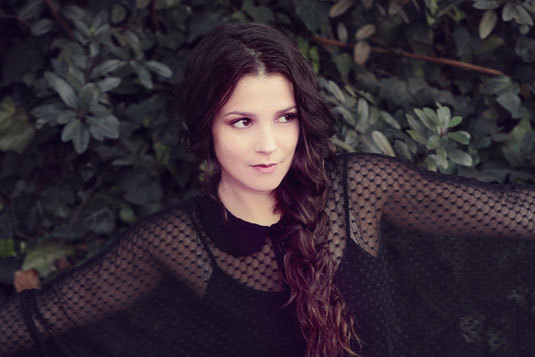 I just played the Bloomfest in downtown LA and it happened to be my first festival experience! I like the open air and the possibility of the crowd growing as the set progresses. It’s a magical feeling watching more and more people gather to watch.

I haven’t quite had any bad experiences yet, but I’m sure festivals can get chaotic. I try to always remember to keep an open mind and not get too stressed about things.

After moving to the states from India, we landed in the countryside of Pennsylvania and I never really had the chance to go to any proper music festivals. Unless you count the many hippie-like festivals on farms where there was music and my dad would lead drum circles and play the sitar. My mum would sing Indian ragas. Nothing at all like Lollapalooza!

I’m so excited to watch some of my favorites at Lollapalooza! I really admire Jack White. I love how you can see an artist’s growth and transformation but there is still a constant thread… something in their aesthetic that is entirely their own. Sigur Ros is pretty much my favorite band and I often listen to them when I’m painting. I’ve always dreamed of seeing them live! I’m also really exited for Florence and the Machine, Bloc Party, Franz Ferdinand, Metric, and Chairlift. Miike Snow is playing too and I do a cover of their Black and Blue (it’d be so so wickedly sweet if they heard my version, haha).

I love all my band members and they are actually crazy fun and relaxed to travel with. If anyone, I’m the weirdest one to sit next too. I blast Fever Ray in my headphones and draw ocelots and models and bounce around.

I recently purchased Hariprasad Chaurasia’s “Daylight Ragas.” He’s a world renowned Bansuri player (it’s the main indian flute). I also got a few songs by Iamamiwhoami and My Brightest Diamond.

This is my first time in Chicago so I’ll have to find out!

I’ve been doing shows throughout the West Coast for the last few months and I’ll be going back home to LA after the weekend, playing shows like School Night at Bardot in Hollywood. Lollapalooza’s an amazing opportunity. The radius clause hasn’t been an issue for me.

I would LOVE for them to check out my song “Sunlight” going on sale July 31st! If they like it and want more, stay tuned in and hopefully I’ll be coming to play shows soon near them!

One thought on “Ten Questions We Ask Lollapalooza Performers: Helena”