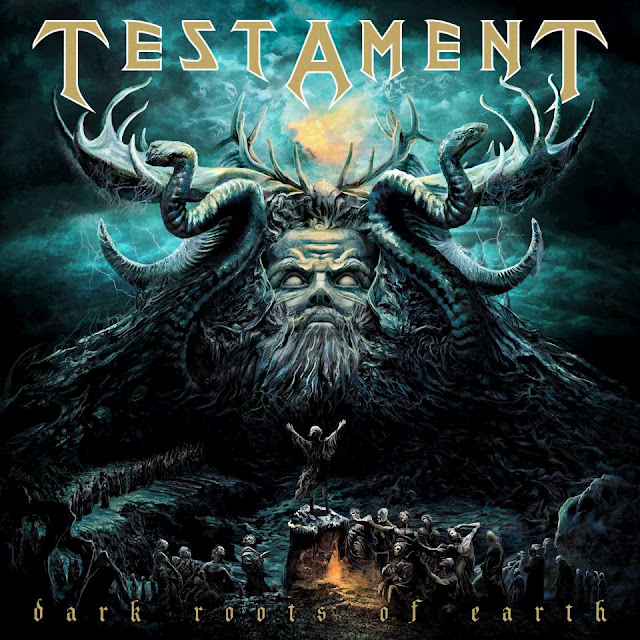 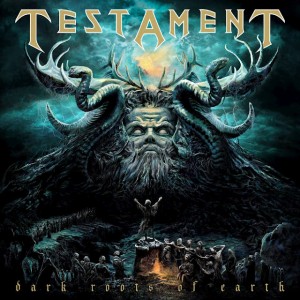 To be honest, I would rather see Testament included in the “Big 4” line-up than Anthrax. The lineage is there and, most importantly, the band has parlayed its third decade into an example that even headliners Metallica should have considered well before the submission that was Death Magnetic.

But as much as I liked Testament’s The Formation Of Damnation, there’s very little on the band’s newest album in four years–Dark Roots Of Earth— that would indicate that the time in between was spent on forging ahead on lyrical matters to match the top-notch thrash delivery.

The theme of war is packed within Dark Roots Of Earth, but good luck finding anything beyond clichés like “sea of rage,” “crimson rain,” and “raining seas of crimson rage.” Ok, I made the last one up, but just watch Billy use it for a line in Testament’s next release.

“True American Hate” sounds nothing more than a ready-made soundtrack for aggro meatsticks who view war as nothing more than video games with little consequence. The inspiration, claims vocalist Chuck Billy, came after seeing video of Middle Easterners burning the American Flag.

It would take Billy just a few seconds of research to discover the similarities between our endless occupation and that of his own well-documented Native American heritage. It’s not a matter of being on the right side of politics either, but to sum up a gut-check reaction to a video specifically choreographed to rile up Americans is just plain lazy.

Almost as embarrassing is the ballad “Cold Embrace,” which was evidently included as some kind of way to break up the record’s non-stop brutal delivery. It certainly wasn’t included to feature Billy’s thin vocal style and he sings some bullshit about a mythical sleeping beauty.

If there’s anything, or anyone, that can save Darks Roots Of Earth from the weight of its hokey hawkish celebration of war, it’s guitarist Alex Skolnick’s incredible soloing. It manages to save the record during points where you become absolutely numb to the countless mentions of “hate,” dim-witted references to “liberty” and “freedom,” and confusing allusions to the American war-machine, which seem to support and criticize it simultaneously.

Dark Roots Of Earth is a lowest common denominator metal record that places fans in the unfortunate position of having to defend Testament’s narrow-minded jingoism instead of celebrating their unquestionable abilities as one of thrash’s elder statesmen.

On second thought, let’s put Overkill on the Big 4 line-up instead.