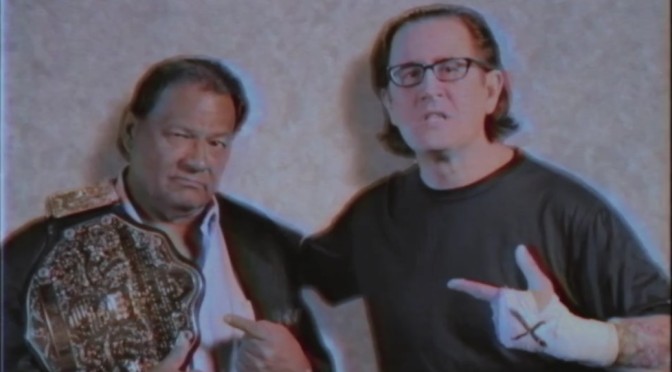 Video: The Mountain Goats -- “The Legend of Chavo Guerrero”

Just like every middle school aged boy in the early 80s, I got into professional wrestling for a while. It probably started with seeing Hulk “Thunderlips” Hogan in Rocky III, but who knows? Wrestling was booming with Cyndi Lauper videos featuring Capt. Lou Albano and Hulkmania spreading everywhere. My pals and I would attempt figure-fours and piledrivers on each other in our basements. I can no longer remember who was a good guy and who was bad, but they were all impressive characters: Andre the Giant, Junkyard Dog, Rowdy Roddy Piper, the Iron Sheik, King Kong Bundy, Brutus Beefcake, Big John Studd, Sgt. Slaughter. Very exciting stuff when you’re a kid.

I’d never heard of Chavo Guerrero. As John Darnielle admits, Guerrero was “almost completely unknown outside of Texas and the west coast.” But I love him now because of this video. By now, we all know Darnielle’s back story as covered on 2005’s breakthrough album The Sunset Tree: his stepfather was abusive and cruel, but also intellectual and complex. “The Legend of Chavo Guerrero” rises above being just a tribute to a childhood hero in the verse where Darnielle directly addresses his stepfather:

At this point in the video, JD has one hand on Chavo’s shoulder and points straight at the camera with his other hand. In the previous verse Darnielle admitted, “I hated Chavo’s enemies, I would pray nightly for their death,” and in recent interviews he has said that his stepfather always rooted for the heels. So the next lines are even more powerful:

Chavo makes a “Whoa!” face in the video, sort of like “Dude, did you just say that? Did you just suggest that your prayers were answered? That your stepfather was my enemy and you prayed for his death and now he’s dead? Whoa, dude!”

Beat the Champ is out now on Merge Records.