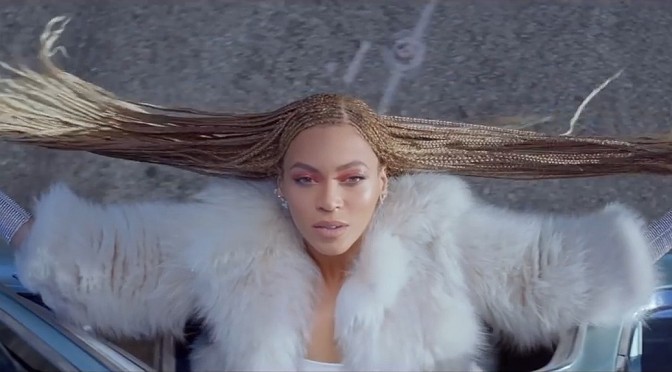 It was around 2:50 PM Eastern Time, I was in my room in front of my desk talking on the phone with one of my closest friends, Amo. We were talking about how to navigate workplaces, and other spaces we wanted to access as a Black woman. We talked about how we were learning how to be productive and how life was popping at the moment because we were doing so much. Also, how do we pick and choose battles? Which battles are worth fighting? To what extent are we willing to be uncomfortable until it’s acceptable to pop off? We needed to get employed and answer these questions in order to survive. As we’re talking about being the young, Black hustlers that we are, “Formation” interrupted our conversation and honestly, I couldn’t even remember what I was saying before the video dropped, all I remember after that is saying “I love Beyoncé” repeatedly as I watched the video and Amo was on the other side of the line wheezing.

“Formation” dropped at the perfect time for me, just as I thought that I needed to tone my blackness down, I was uplifted and encouraged to do the stark opposite. “Formation” was necessary and to underestimate Beyoncé’s timing on all this is to underestimate her ability to use the power that she knows she has. We’re talking about a woman here that works day and night and makes sure that every aspect of her artistry is perfection. She is known for this. “‘Formation’ is a late entry into the dialogue about black lives, and it largely sidesteps the politics. Still it feels essential.” But how? Do you really think she didn’t know that she was going to perform at the Super Bowl? Do you believe that she wasn’t preparing to release the video the day before she performed it in the Bay Area, where the Black Panthers Party was started? If you believe this a money-move, I worry about how someone like you exists among the human race.

Unapologetically celebrating your blackness isn’t palatable to a white gaze and Beyoncé is more likely to lose money by having done this. But she doesn’t need more money, and she’ll continue to make more money regardless of what some myopic, racists think of her. At this point in her career, she doesn’t need to care.

This song made a lot of people angry, people expect Black women to be inclusive. That everything Black people do needs to include everyone else even though Black people are excluded from most spaces. This video and song was exclusive, it’s the embodiment of the lyric “how you gon’ hate from outside the club—you can’t even get in.” An outsider looking in wouldn’t be able to understand all of the references in the song. “Formation” is a Black femme anthem. It’s not for all girls like “Run the World” was. She spoke about her experience as a woman. In “Run the World,” it was about how “we run the world”, but the specification of her black womanhood and her usage of the word “I” is important in this song. This song is made for Black femmes to chant in clubs, it’s not meant to be inclusive. If you don’t understand why she carries hot sauce in her bag, if you don’t have a negro nose—”Formation” was not written with you in mind and you better not be caught chanting that you like your negro nose, ever. What was interpreted by some as a display of grandeur was a gift to this Black girl’s Instagram captions, and more importantly, it was spiritually uplifting for me as a Black woman. Before Beyoncé even mentions that she’s the Black Bill Gates in the making, before she mentions that she works hard and she grinds till she owns it, she says: “Earned all this money but they’ll never take the country out me” and that’s followed by “I got hot sauce in my bag, swag”. You can’t take the country out her no matter how high up her paper stacks up because she’s Southern and Black AF and hot sauce in her bag, swag.

The median wealth for a single Black woman in the United States is $5. When people call Beyoncé a titan for capitalism, the only reason I’d understand why they’d call her that is because she’s worth millions, and when she says she just might be the Black Bill Gates in the making that isolates a lot of non-millionaires from relating to her. What I don’t understand is the unmitigated anger that people have for a Black woman getting her coin. People aren’t hiring Black women, and when they do they short us and we have to deal with microaggressions and not so subtle racism. So when Beyoncé says “I dream it, I work hard, I grind till I own it” she knows that every Black girl in the club on a Friday night after having that deposit hit is chanting this because we worked hard, and we need to grind for every. single. penny. we have. And when she sings “I slay” Black girls everywhere are feeling cocky fresh with their baby hairs and afros.

In the “Formation” video, the girls are lined up or, in formation with their afros and glistening melanin, not a non-black person is in sight, well except for the cops. Black women have been in the frontlines in every movement. The Black Panther Party wouldn’t be anything without the women involved, the Stonewall riots were started by a Black trans woman, the Black Lives Matter movement was started by Black women—black women get in formation and then get shit done. “Okay ladies now let’s get in formation” is a call to Black girls only, the “okay” gives us a sense of familiarity with this, we know what we need to do, we’re together in this struggle and together, in formation we run the world.

Najma Sharif is a Minnesotan living and studying in New York City. She likes her coffee like she likes herself— bitter and strong.