Is Sly Stone going to blow his career?

He has a reputation for being late to concerts or not showing up. Is this going to disgust fans so that they turn to somebody who will be there when they have bought a ticket and arrived for a concert?

Probably not. Stone’s fans probably will wait around for him indefinitely, since, for one thing, his music is good. At the Sly and Family Stone concert in New York on Thanksgiving, 21,000 persons sat for 35 dull minutes, without even recordings being played, while music stands and mikes were set up for Gladys Knight, one of the warmup acts. Stone says his reputation hasn’t hurt his career at all.

A riot in Chicago last summer was said to result because Sly was late for a Grant Park concert. Stone says that’s a bum rap. “We were on our way there about an hour before time. We got within six blocks, in three or four limos, and all of a sudden we were stopped by the pigs. They said, ‘You guys can’t go there. They’re rioting.’ I said, ‘Well, give me a ride in the paddy wagon, because I’m going there and play, man.’ I thought maybe if I’d start playing they would disregard all that rioting stuff but the cops ran off and left me. But I wasn’t late. I was way ahead of time.”

“I’m not a riot starter.” Previously, at Randalls Island, New York, the group’s manager had announced they wouldn’t be coming because they couldn’t afford to charter a plane to get there from another engagement, but they would be glad to give a free concert in a New York Park later.

After the riot in Chicago, New York decided it did not want them in a park, and the mayor of Boston canceled a concert scheduled for his city. A November concert in Detroit was canceled about an hour before it was to start. The manager, who said he would never alibi for Sly, said it was because Sly and The Family Stone were expected in Detroit by plane and when they did not arrive at the airport, the concert promoter canceled the concert. They arrived in Detroit by limousine. Stone says he had a deal to telephone the promoter at 7 pm that he was on his way, but he was asleep and didn’t call. During the interview, the telephone rings. It is Detroit. Stone says, “I’ll be there early. What else can I tell you?” A make-up concert in Detroit, a week after the canceled one, subsequently is held.

In the New York concert, Sly and the Family Stone sound superb and his stage personality is engaging and assertive. During the first number, the crowd begins to surge forward policemen move in front of the stage and begin to push people back down the aisles. Stone waves the music to a halt and speaks alternately to both police and fans: “They’re not going to start any trouble. Contain yourselves, please, officers, stand aside. There’ll be no problem, will there? Let’s have a big hand for the officers. They’re here for our protection, so that we won’t do anything that we don’t want to do. All we got to do is contain ourselves and they can sit down. If we can understand that, so can you sit down, man. That’s right.” The crowd moves back from the stage, to dance in the aisles, sometimes swaying the building. The policemen walk to the sidelines. No more problems.

Sly and the Family Stone record for Epic. Four of their LPs are gold, including the newest, “Sly and The Family Stone Greatest Hits.” Many of the songs, which Stone writes, are songs of brotherhood. The group has both black and white members. At one time, Stone says he thinks of himself as a preacher. At another he says “I guess I’m about as kind and about as militant as anybody. I’m just a mere human. I belong to Sly. That’ll do justice more good.”

The interview, for which Stone has been late, has been going well until he excuses himself from the room for a time. When he comes back, we move to a room which contains some of his entourage, one painting his electronic organ red, white and black and sprinkling it with sparkles. He mumbles, doesn’t answer questions and talks vaguely about being unique. The day before, he has gone to sleep while an interviewer was asking questions.

Now that Jimi Hendrix is dead, Sly Stone is considered the leading black performer in Rock, although his music encompasses more than Rock. Asked whether Hendrix’s death affected him, he says that it must have or the question wouldn’t be asked. Asked his opinion on drugs, he says, “You shouldn’t drink too much coffee. I think other things.”

Later he says, “Dying young is hard to take. Selling out is harder.” Now he is the big rock star, grandly commenting on the public relations man’s square clothes, saying “I get bored easily. I’m always asked the same questions. I can’t con myself into having the same enthusiasm over the same questions. People aren’t asking me nothing hard.” Like what? “Oh, like what’s my favorite color.” He says, “People like us. That’s no problem. We’ll always play. We like people. We really do. That’s what makes me loose. I dig them.”

“Are you going to say bad things about me? Don’t. I really don’t need that.” 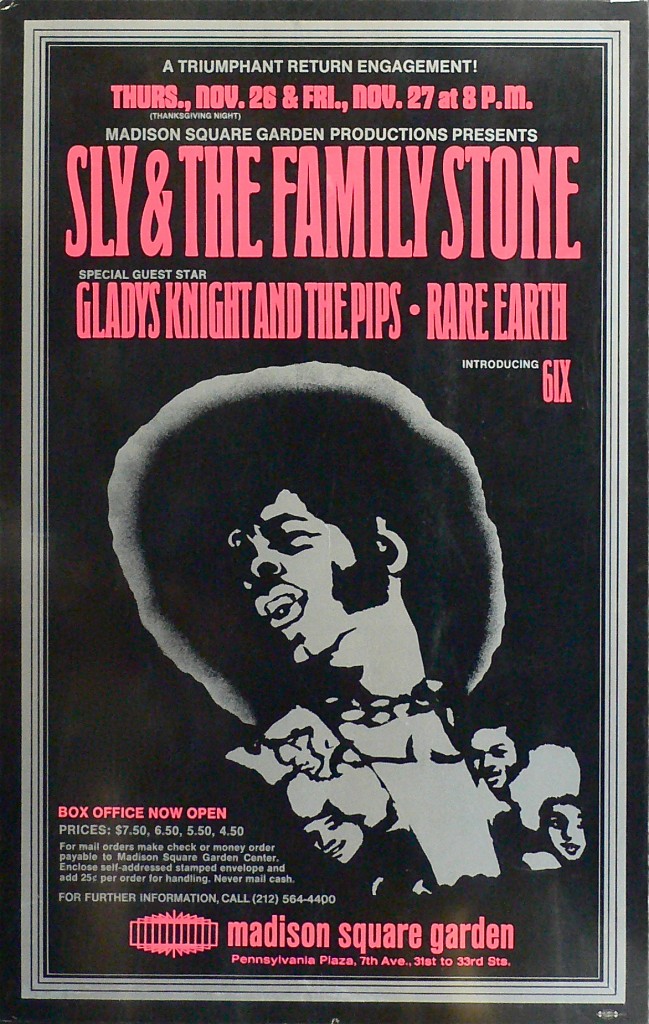 Video: Sly and the Family Stone – “Thank You (Falettinme Be Mice Elf Agin)” on the Dick Cavett Show, 1970

Video: Sly and the Family Stone – “If You Want Me to Stay” on Soul Train

IF YOU WANT ME TO STAY by Sly & The Family Stone