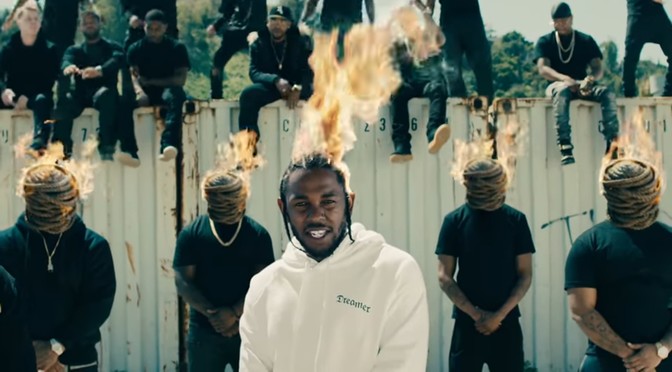 Ladies and gentlemen of the United States, I am pleased to announce we have a new number one record. After sitting at the top of Billboard’s Hot 100 singles chart for 12 of the year’s 18 weeks, that doughy English dweeb Ed Sheeran is finally knocked out. And who better to do the deed than righteous rapper Kendrick Lamar?

Lamar’s “HUMBLE.” is only the fifth number one record of 2017. Back in February I was telling Johnny Loftus about how I’m never exposed to the Top 40 anymore unless I make a conscious effort to seek it out. And when I do, I’m often surprised by how freaky and interesting popular music has gotten. Many big hits are more “experimental” sounding than a lot of stuff being released on our beloved indie labels. We thought we should at least cover the singles that reached the top of the chart, or as Johnny called it: “the most main of mainstreams.” But then dopey old Sheeran just stayed at No. 1, week after week after week. And come on. “Shape of You” is nothing to write home about. It’s so flaccid and predictable it makes John Mayer’s “Your Body Is A Wonderland” sound substantial. So good riddance. Finally.

And “HUMBLE.” is a jam! A sparse one-finger piano riff drives the beat and Lamar’s rhyming is effortless as always. It’s great that an artist as cool as Kendrick Lamar can reach number one on the pop singles chart. Lots of grumpy old dudes dismiss current music entirely, myself included. That’s a mistake. There’s always good new stuff being released and sometimes the most popular song is also the best song. “Sit down, lil bitch. Be humble.” That’s solid advice that we should all be listening to these days. Reminds me of the great Rookie essay by Charles Aaron where he shares some tips for how not to be a jerk; it boils down to: Fall back…listen…question. That’s an important lesson that can take a lifetime to master. I’m still working on it.

Here are the four other number one songs of 2017 so far.

Video: Ed Sheeran – “Shape Of You”

Listening to all of these gives you a weird impression of the state of pop music in 2017. In 2013 Billboard started including YouTube streams in its Hot 100 calculation. It currently blends streaming, airplay and sales data. As chart analyst Chris Molanphy pointed out in response to last week’s all-male Top 10: “streaming=rap=men.” But then there’s Ed Sheeran. So who knows?

JTL deserves 100% credit for the headline of this post, and his Pay to Slum series was part of the inspiration for Number One Records.