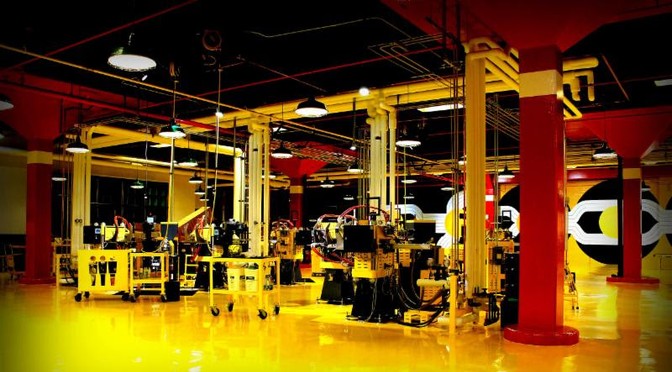 Although White moved to Nashville, once a Detroiter, always a Detroiter.

But what may be more important is the establishment of Third Man Pressing. In Detroit.

Jack White’s company is producing LPs in Detroit. It is a 10,000-square foot factory that “officially” opened on February 25.

It is a production facility that presses hot vinyl between a set of dies into discs that has a capacity of 15,000 records a day.

Although “Detroit” is known for cars, in actuality, there are only two automotive plants in the city limits proper, the Jefferson North Plant where Jeep Grand Cherokees and Dodge Durangos are produced, and the Conner Avenue Plant, where the Dodge Viper is manufactured. Viper production ends this year. So there may be just one car plant.

(And the company that runs that plant, FCA US, is a part of Fiat Chrysler Automobiles, which is owned by Fiat, which is based in Italy. That car that Eminem drove in that Chrysler commercial a few years back? It was built in Sterling Heights, Michigan, not Detroit. Close though.)

With the opening of Third Man Pressing, Detroit now has two record pressing facilities, with the other being Archer Record Pressing.

Although Third Man Pressing will produce Third Man vinyl, it is also likely to do work for others that are interested in creating LPs.

Third Man Pressing is located in the Midtown section of Detroit, on West Canfield, near to the Wayne State University campus. Dave Marsh once attended Wayne. For a while.

About a mile away from Third Man Pressing is the Masonic Temple which was completed in 1926. It is the largest building of its type in the world. It contains theaters, ballrooms, a swimming pool, bowling alley, and probably all manner of secret spaces.

In 2013 the facility was in arrears on its tax payments to the city of Detroit.

His mom once worked there.

One thought on “Jack White in Detroit”