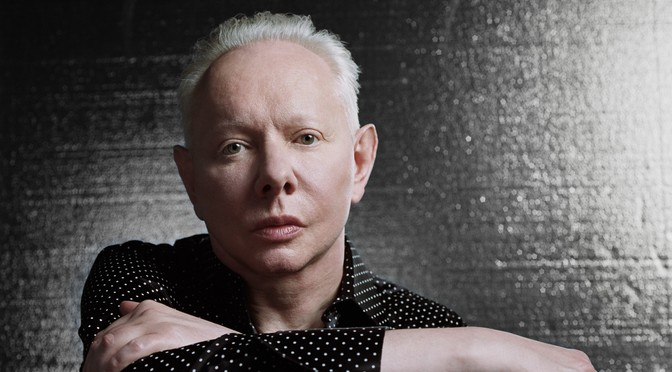 At about the midway point on his month-long tour, we saw Joe Jackson at the Michigan Theater this past Saturday night. It was probably the fourth time we’ve seen him. Some middle-aged fanboys in the row behind us were trying to top one another with shows they’d seen. One said the last time he saw Jackson was in Royal Oak eight years ago, which is conceivably the last time we saw him.

Then, he was playing what was once a movie theater. And the Michigan Theater still shows movies when it doesn’t have live performances on its stage.

The Joe Jackson tour seems to be of places of approximately that size. Not small. Not large. The Michigan Theater seats 1,700 and it seemed as if most, if not all, of the seats were occupied. After the visit to Ann Arbor, it was off to the Hoyt Sherman Place in Des Moines and the Club Brady in Tulsa, OK, with a few stops in between.

For the last encore number they did “A Slow Song” from Night and Day, which allowed the musicians to leave the stage one by one, which is a fine approach–and one used lo those years ago Royal Oak. Some things remain.

The concert was a mix of his music through the years, with a few things somewhat unusual thrown in, as in a cover of Joni Mitchell’s “Big Yellow Taxi,” which Jackson played in a New Orleans stride style, and the whole band performing Abba’s “Knowing Me, Knowing You.” Yes, you read that correctly. They played it straight, not mockingly.

He pointed out that he hasn’t released a record since Fast Forward, about 18 months ago.

He wasn’t out in support of a new record. There wasn’t evident merch in the lobby. The ticket prices were comparatively modest (we got in the balcony for $45 and then a bunch of additional fees from you know who on top). And there was a full band, playing to what would be a set of risers in a basketball arena.

Which led me to wonder about how he keeps body and soul together. And why Jackson, in his early 60s, continues to go out on the road.

If there is something to be said to getting a certain energy from the roar of the crowd, then he certainly had his battery filled, as there was nothing but admiration exhibited.

The audience, not surprisingly, consisted mainly of people who were probably in their early 20s when I’m the Man and Look Sharp were released in 1979. No one there didn’t know the lyrics to “It’s Different for Girls” or “Sunday Papers.”

Which brings me back to those guys behind us. They shouted. They clapped. They stamped their feet. They seemed desperate to convince themselves and the world that they were there, that like Jackson, they are still relevant.

Walking down Liberty Street to the parking deck after the show, we overheard a man ask a woman how she liked the show. And then he said, “My wife doesn’t attend shows with me anymore.”

And we wondered if he was like those guys behind us.

“What the hell is wrong with you tonight?
I can’t seem to say or do the right thing. . .”