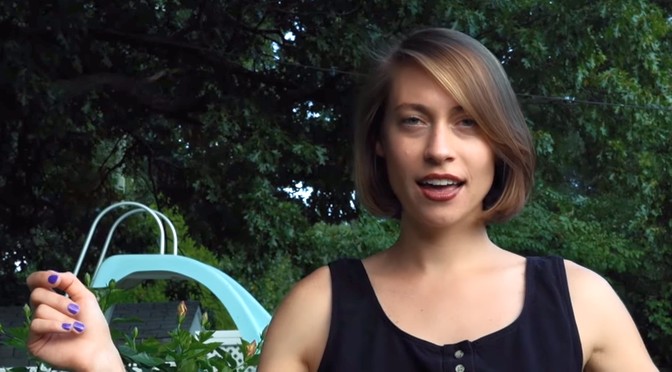 Single out now on Polyvinyl.

It’s important to know how to hula hoop. It seems impossible at first, but keep trying. You’ll get it. Don’t try to go too fast or else you’ll just look like spaz. Another tip: learn on a good quality, heavier hoop. You can still buy it at the grocery store but just don’t get the super cheap lightest ones, because they’re harder to do. The heft of the hoop helps keep the momentum, and that’s key.

Anna Burch is a solid hula hooper and this video is evidence of that. She grew up in St. Joe (West Michigan, represent!) and lives in Detroit. She’s been in a bunch of bands I’ve never heard, but now she’s gone solo. Back in January she told the Metro Times that her solo debut (working title: Quit the Curse) had been “all recorded” but she was frustrated with the results and intended to “lay down new tracks” with producer Collin Dupuis in February. The full-length results are due in early 2018.

Burch sings “2 Cool 2 Care” as if it doesn’t bother her that her boyfriend is an asshole.

Slamming all your drinks, you don’t have to think about me
You’ve got all your friends, used up all their meds, honey

She says, “I like you best when you’re a mess.” But the extended bridge reveals she knows the deal.

Dare to dream, Anna! Ditch that prick and go find yourself a grownup who knows how to treat you properly.

This is a great song, and it would be just as good if its video didn’t feature hula hooping. But it does, so how lucky are we?