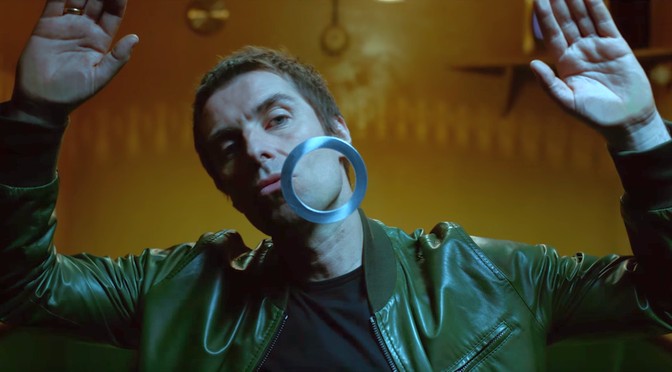 I am an unapologetic fan of Oasis. I like a little attitude in my rock and roll and the Gallagher brothers deliver that by the truckload. Noel’s clearly the funnier of the two (and funnier than pretty much everyone), but the younger Liam wins on pure shit-eating grin attitude. His stance alone tells you all you need to know about him, and it’s that trademark posture that takes center stage in the new video, “Wall of Glass” for his debut solo track.

Because he’s Liam Fucking Gallagher, there’s no need for a plot or a narrative in this stylized video full of blinking lights, seedy hotel lobbies and a hall of mirrors. What does it mean? Nothing! The director knows what he has to work with and just sets our kid up in different situations in which to be snotty. And let’s be clear: he delivers.

More importantly, this is the best track Liam Gallagher has released since “The Shock of the Lightning” from Oasis’ final album, Dig Out your Soul in 2008. There were a number of tracks I liked from Liam’s first venture out sans The Chief, Beady Eye, but this track has the right combo of hooks and instrumentation to cut through the noise that makes for a great Gallagher Bros. track.

“Wall Of Glass” is the first track to preview his forthcoming album As You Were, due in October on Parlophone/Warner Brothers.

Liam Gallagher is on tour now, which opened with a sold out homecoming show at Manchester’s O2 Ritz – all profits from which were donated to the We Love Manchester Emergency Fund, organized by Manchester City Council in partnership with the British Red Cross. Watch footage from the show HERE and some dude streamed most of the show from the crowd HERE.