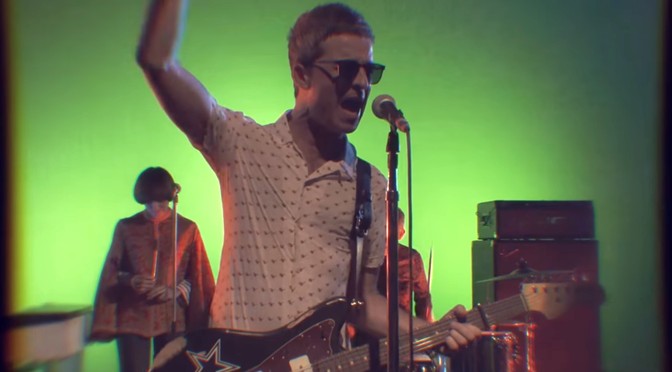 From Who Built The Moon?, out November 24 on Sour Mash/UMG.

Big brothers are a pain in the ass, it’s their birthright. I know, I’m one. But there’s maybe nobody who relishes the role more than Noel Gallagher, who continues to assault and annoy his little brother Liam with musical and rhetorical noogies, long after the break-up of Oasis. For years in interviews he would laugh off the attention Liam got as the front man for the most 90s Brit Pop machine ever built by getting to stake a claim as its chief engineer. To borrow from their most obvious influence, Liam got to be “The Cute One” while Noel got to be “The Rich One.”

And so, true to form and on the heels of Liam’s solo debut (As You Where), Noel readies his follow up to 2015’s Chasing Yesterday with this year’s Who Built the Moon? and a trippy lead-off single/video, “Holy Mountain.” The track is a charger with big horns, a choog-a-loo rhythm, Paul Weller on organ and some BJM refugee in a poncho playing penny whistle!

SPOILER ALERT: Like a real spoiler, one that might ruin your life… DO NOT READ FURTHER UNTIL YOU’VE HEARD THE SONG!

I really dig The Chief’s new song but have to agree with some online fans/critics who have identified a resemblance in the chorus to Ricky Martin’s “She Bangs.”