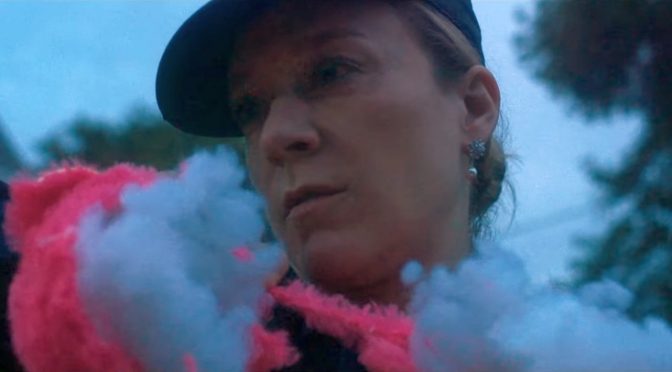 From the Nice Life Winter ’18 playlist, out December 8 on Nice Life.

The always subtle Pussy Riot is back with another video denouncing the police state. It’s a cute pop song with a catchy chorus and sarcastic lyrics. Chloe Sevigny plays a law-enforcement officer in the video and forces children to watch videos of Trump and Putin while smashing their toys with her riot control baton.

No problems in paradise, we locked them up
We all have to sacrifice, it won’t be long
Shut the borders, perfect order, sons and daughters
Drink the Kool Aid, it’s the new way, do what I say

In case you miss the point, Pussy Riot released a big statement (below).

Pro-authoritarian trends and autocratic, conservative, right-wing leaders are spreading around the world like a sexually transmitted disease. What can we do?

If we find a way how to act together, be articulate, focused and persuasive, we can shift mountains. Look back: people did it before. Soviet dissidents were fighting against one of the most oppressive governments on the planet and shared their own diy magazines (samizdat) via secret networks. Labor union leaders and civil rights activists were dying for their beliefs in the US. And it actually did make our world a better place.

“Think about 120 years ago. There were children working in factories, losing their fingers. People fought back. They fought to create unions. Think about the women’s movement. Think about the civil-rights movement. You’ve got to jump in and start fighting.” -- Bernie Sanders reminds us.

When Trump won the presidential election one year ago, people were deeply shocked. What was in fact blown up on 8th of November 2016 was the social contract, the paradigm that says that you can live comfortably without getting your hands dirty with politics.

But we’re more than atoms, separated and frightened by TV and mutual distrust, hidden in the cells of our houses behind screens, venting anger and resentment at ourselves and others. If you have to point at an enemy, our greatest enemy is apathy. We’d be able to achieve fantastic results if we were not trapped by the idea that nothing can be changed.

What we’re lacking is confidence that institutions can actually work better, and that we can make them work better. People don’t believe in the enormous power that they have but for some reason don’t use.
We do fight with the police state in Russia; since we’ve been released from jail we started an independent media outlet Mediazona (zona.media) that covers what’s happening in Russian courtrooms, police stations, prison, labor camps. With lawyers of “Zona Prava” (Zone of Justice) we’re fighting for prisoners -- helping them to get medication and better conditions, get out of jail, open criminal cases against guards and cops who break the law and abuse their power.

Actions are more important that opinions and comments. It’s crucial to build alternative institutions, establish alternative power structures and networks, especially when your government sucks. There’s a lot that can be done and should be done. Putin will not disappear tomorrow, but we can show our fellow Russians how corrupted, damaging and ineffective his rule is. If everybody who denounced Trump on social media showed up on the streets and refuse to leave until he’s gone, he’d be out of office in a week. What it takes is just to abandon our learned helplessness.