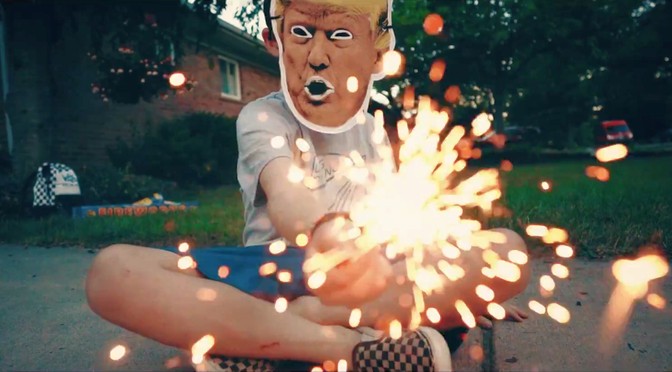 Mostly dormant for ten years Livonia, Michigan’s Thunderbirds Are Now! just released two new songs to benefit the ACLU. This is one of them.

“We are the outsiders that you don’t represent / Not my chosen leader, not my president.” I suppose times like these don’t really call for subtlety, and that’s okay. Sometimes it’s fine to be hit over the head with a message as long as it’s got a good beat and a catchy melody. The band reworked the lyrics to a couple of older, unfinished songs and recorded them at Big Sky Recording in Ann Arbor in one day. Good for them.

You can get both new songs on Bandcamp.

It’s 2017 and there are two new Thunderbirds Are Now! songs to listen to. We haven’t recorded new music since the release of our 2007 album “Make History,” and given the current chaotic political climate, now seemed like a good time to come back. We took two older songs that we never captured to “tape” (or a computer’s hard drive, as it were), reworked the lyrics, and came out the other side with perhaps the best two songs we’ve ever written. Although we’ve never been the most overtly political band, we felt compelled to not only say something about what is going on, but to do something, too.

That’s why all the proceeds we collect from the Bandcamp downloads of these songs will go directly to benefiting the ACLU. It’s not the most we can do to give back, but it certainly isn’t the least either. There are injustices in this world that need fighting, and so if these songs compel you to donate to a worthy cause, then all the better.

We recorded “Operate” and “Outsiders” in one day at Big Sky Recording in Ann Arbor with Geoff Michael at the wheel. He indulged our requests to add synthetic drums, live piano and to run a guitar through a Leslie speaker without batting an eye. He is a calm, gentle man, and the perfect person to capture a band who hasn’t seen the inside of at studio in 10 years (or ever, since these are the only tracks we have ever recorded with Julian on bass). The tracks were mixed by Andy Reed of Reed Recording Co. One of our first shows was with Andy’s old band in a basement in Lansing, MI, so it seemed fitting he master these final tracks. Our keyboard player Scott Allen created the art.

We hope you sincerely enjoy these songs. We’re immensely proud of them, and they act as a bit of closure to a band that gave our all in everything we did. Please blast them as loud as you can whenever you play them, whether to annoy your hick neighbors, to soundtrack your morning run, to dance around with your kids, or to remember what it was like to be young and slightly more carefree. We hope these songs help -- even a little bit -- get you through this mess we’re in.