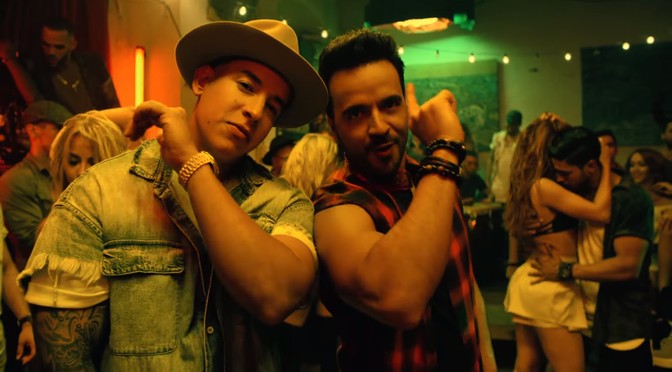 Okay now this is getting ridiculous. My dumb new column is starting to turn Glorious Noise into a Top 40 blog. This was never supposed to happen. In fact, this is the first time since 1990 that we’ve had four new number one records in four weeks.

In some ways I find it hard to believe that these are really the most popular songs in the country right now. But I guess that just shows how out of touch with the mainstream I am. Billboard reports “Despacito” has received 54.3 million U.S. streams and 104,000 downloads in the week ending May 11, and had a radio audience of 57 million in the week ending May 14. So that’s a lot, right?

I dig the Spanish guitar. But Bieber’s autotuned vocals are annoyingly whiny as ever. The original version without Biebs is way better. The rest of America apparently doesn’t agree since the remix accounts for 73% of the song’s sales. Oh well.

The video makes Puerto Rico look awesome. My brother-in-law worked in San Juan for a while but we didn’t make it to any bars that looked like that one when I visited with my family. Might have to go back some day and seek this place out! Luis Fonsi and Daddy Yankee obviously know where the action is.

It’ll be interesting to see if more songs sung in Spanish reach the top of the charts as our demographics shift. This is the first since the Macarena craze in 1996. Before that, it was Los Lobos’ cover of “La Bamba” which was the bane of my existence in 1987 when I was washing dishes and bussing tables at a “fifties” diner with a Wurlitzer jukebox that seemed to play nothing but that song on repeat. Being a pedantic geek even at 16, I was annoyed by the anachronism. “Why not play the original Richie Valens version?” I’m lucky my boss didn’t punch me in the nuts; I clearly deserved it.

One thought on “Number One Records: Despacito”