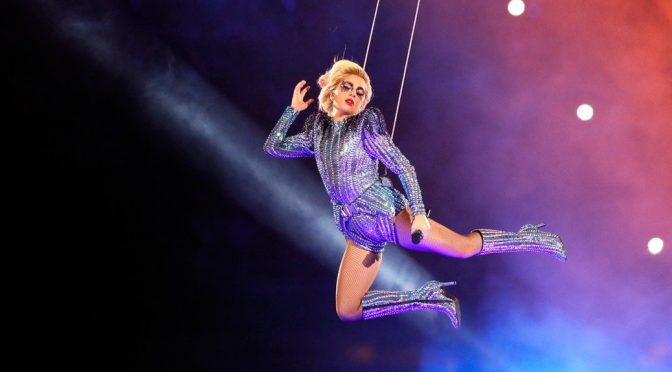 So Gaga gets all gussied up like a Spider from Mars and spins through the air like a second string member of a Cirque du Soleil tribute troupe and belts out numbers including “Poker Face,” “Just Dance,” “Born This Way,” and “Bad Romance.” There was an opening bit including “God Bless America” before she ostensibly jumped off the roof of NRG Stadium and onto the stage that could have been turned to some political advantage, but nope.

There could have been something when she sat at the piano and asked everyone how they were doing. . .clearly an opening to make a comment about the current state of affairs if there ever was one. But she segued into saying hi to her mom and dad, which was certainly nice.

The whole thing was simply a highly orchestrated and choreographed performance that could have been done by Up With People or some similar group of singing and dancing sensations. [It’s unlikely Up With People would have ever sung lines like, “No matter gay, straight or bi. Lesbian, transgendered life. I’m on the right track, baby. I was born to survive.” But I’d like to see them do it. -ed.]

The morning after the PZSSBH a news release went out announcing “Lady Gaga will be traveling the globe with the Joanne World Tour starting on August 1st in Vancouver, BC.”

And it went on to point out that “Citi cardmembers can take advantage of a special pre-sale opportunity for show dates in the United States, beginning Wednesday, February 8th at 9 am.”

She undoubtedly knew that the release was going to go out and why let some political controversy get in the way of that? To say nothing of the poor taste in alienating Pepsi and possibly Citigroup.

Or maybe she was just concerned that someone could have hacked into those 300 Intel Shooting Star drones that could have caused all manner of havoc like something that happened in a galaxy far, far away, and she didn’t want to be on the end of that.