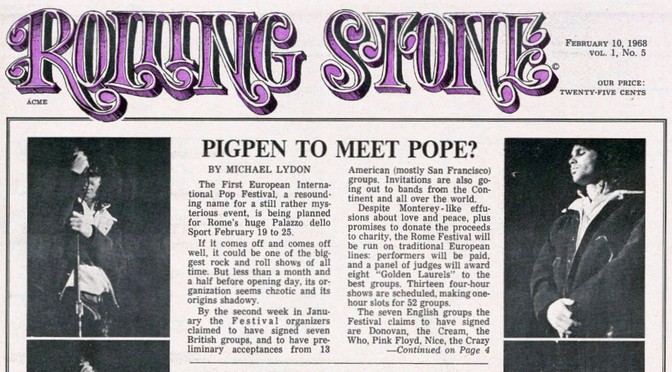 This was the issue when Rolling Stone started giving away roach clips to new subscribers. (“Act now before this offer is made illegal.”) You can scoff, but for its entire first year the Stone remained a DIY organization, run by Wenner and a handful of cohorts. The only real grownup in the group was Ralph Gleason. 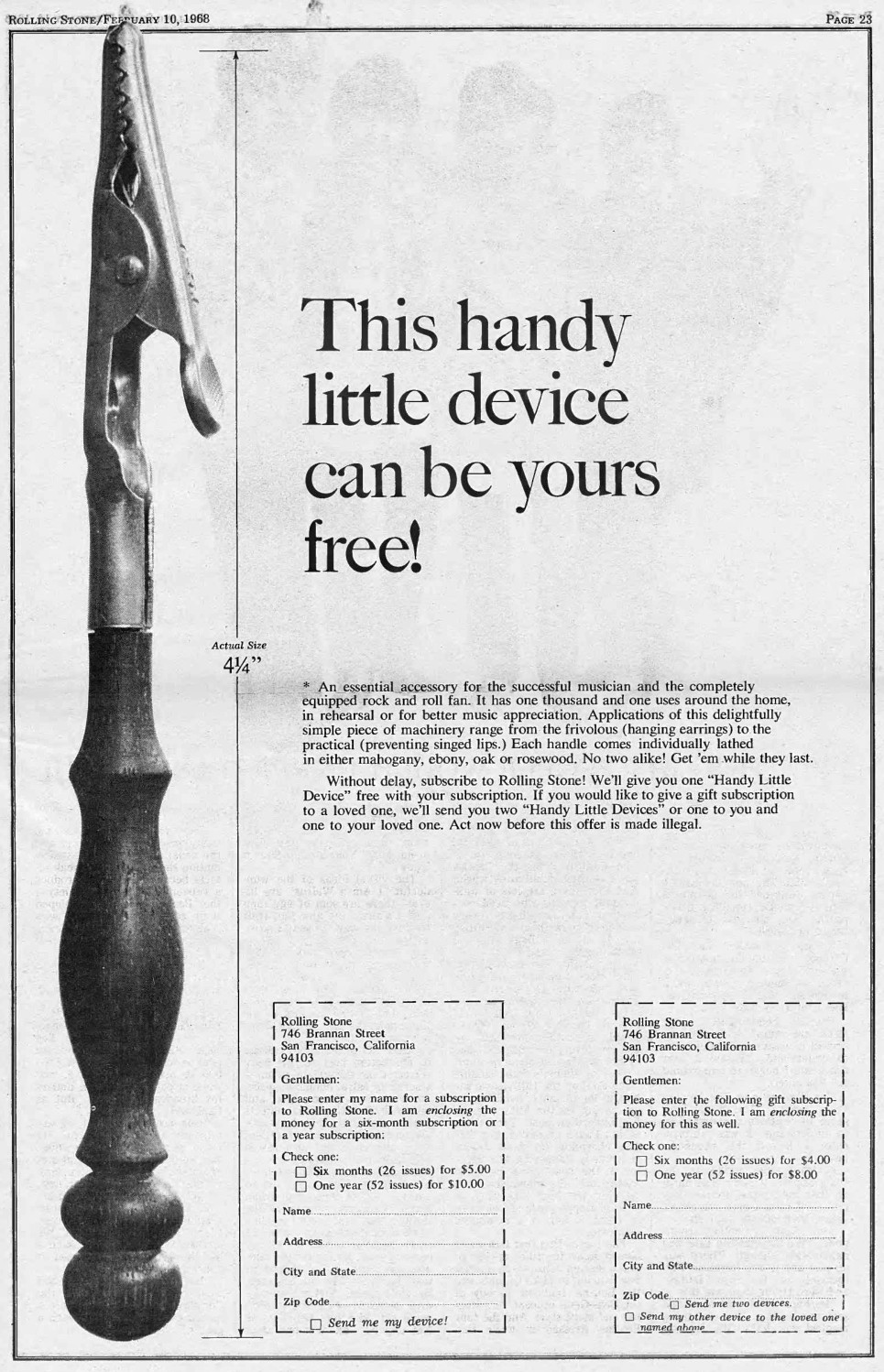 Only three full-page ads for records: Song Cycle by Van Dyke Parks on Warner Bros, Mass in F Minor by the Electric Prunes on Reprise, and (once again) Journey Within by the Charles Lloyd Quartet on Atlantic. Other full-page ads included East Totem West posters, KMPX-KPPC radio stations, a Country Joe concert at Berkeley Community Theater, and the ad for subscriptions.

Features included Sue Clark on the Monterey film debacle, Al Kooper on the Monterrey film as well, Henri Napier on Bo Diddley’s feelings about Black Power, a reprint of a Melody Maker interview with Ringo Starr and George Harrison, an interview with Paul McCartney about the Magical Mystery Tour film, Ralph Gleason on Dylan’s John Wesley Harding, Jon Landau on the Stones’ Satanic Majesties Request, and Michael Lydon on the First European Pop Festival with the headline “Pigpen to Meet Pope?” which so offended promoter Bill Graham that he banned Wenner from the Fillmore, according to Sticky Fingers.

For his “Rock and Roll Music” column, Wenner describes the seven reasons why the “San Francisco Scene” is so great. It’s almost embarrassing how idealistic and uncool he is, gushing about “the finest talent in the country.”

Referring to the lack of action on the national charts after Jefferson Airplane’s “White Rabbit,” Wenner says, “But commercial success (and especially the sort as ephemeral as Top 40 radio) is hardly the yardstick of good music, let alone ‘art.’ The success of the San Francisco bands is less tangible.”

With hindsight, we know that Wenner will soon enough change his tune on the art vs. commercial success breakdown, ho ho, but back in 1968 the scene he’s talking about included locals Jefferson Airplane, the Grateful Dead, Big Brother and the Holding Company, Steve Miller Band, Moby Grape, Country Joe and the Fish, and Quicksilver Messenger Service. Plus bands who relocated to S.F. such as the Charlatans, Mad River, Blue Cheer, Salvation, Mother Earth, the Loading Zone, Sopwith Camel, and Lee Michaels. You’re forgiven for being unfamiliar with most of those. Sopwith Camel?

It’s funny to picture young Wenner, just 22 years old, putting together this issue with his pals and his girlfriend Jane (whose dad invested enough in the first issue to give her ownership of about half of the company). I can imagine him bashing earnestly away on his Selectric typewriter, cranking out a column that his co-founder Ralph Gleason would approve of, struggling to define what makes his local scene so awesome. “The clue to the seventh element is in the light shows…” Really, dude? The light shows?

He was defining the rock and roll canon. Awkwardly, perhaps, but still. Did he have any idea that one day he would found the Rock and Roll Hall of Fame to make this canonization process more formal? Probably not in 1968, but it’s very clear that even back then he was deliberately shaping the foundations for determining what music was important and what was not.

To this day Wenner’s personal opinions on these matters are what we continue to argue about. Love him or hate him, he influenced how we all think about popular music.