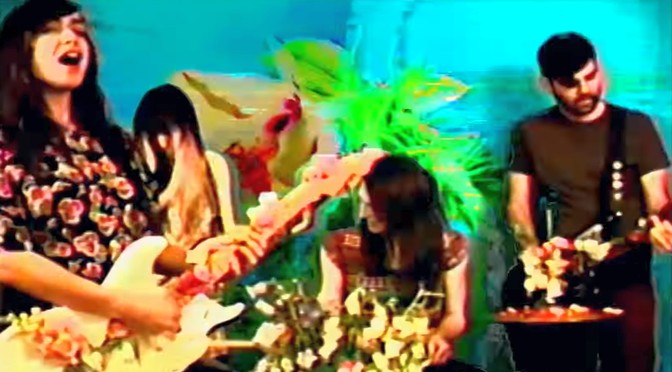 Directed by Alex Blocher. From Like Memory Foam, due November 23 on Damnably.

There’s a lot to like about this song. Not the least of which is that one of its hooks bears a resemblance to one of the hooks of Liz Phair’s “Johnny Sunshine.”

And beware: the chorus is going to get stuck in your head. Didi’s Meg Zakany told Stereogum, “I was singing oo’s in the chorus until Leslie [Shimizu] told me they sounded like ‘haru,’ which serendipitously means ‘spring’ in Japanese.”

I also like how the band got its name:

Her name is Dorothy Sugawara-Shimizu. She is both Leslie’s grandmother and our inspiration. Dorothy, or Didi, as her grandchildren call her, was born and raised in Seattle, Washington, in the 1920s. Until quite recently, Didi kept most of her history to herself, not wanting to burden anyone with the information, and telling them “I didn’t really think my story was that different from anyone else. Everyone has their story.” But Didi’s story is different. She was taken from her home in Seattle at the age of 13. She was put into an internment camp in Idaho for 2 years. She was treated as an illegal alien and faced her teenage years in a windstorm of adversity. But the reason we chose to honor her is not solely because of the struggle she faced, but is so that her story and the story of every woman will be told. We want her to know that her life and her story matter, and that we will be telling it for as long as we can. We want her to know that her quiet strength has given us inspiration to be loud. And we need her to know that she will be remembered and immortalized in our music.

Right on. Be loud!