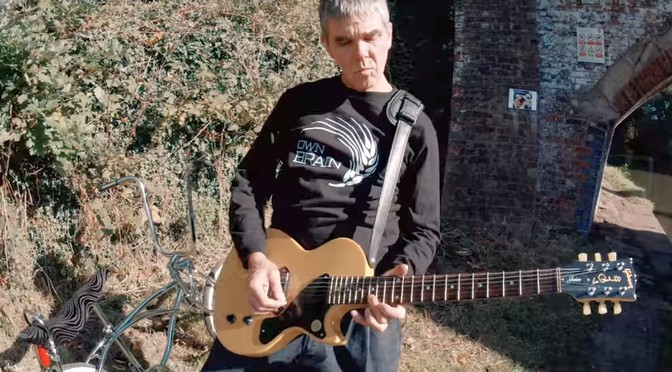 From Ripples, due March 1 on Virgin EMI. Single out now on Black Koi.

In June, 2017 Ian Brown teased an audience at what is to date, the Stone Roses’ last show. As things at Hampden Park in Glasgow came to a close, Brown reportedly said, “Don’t be sad it’s over, be happy that it happened.”

Nobody from the band has commented on if the band has broken up again, let alone why, but by looking at the first video from Brown’s new album we can venture a guess: “I don’t need ’em.”

Cruising around on a low-rider bike to a clavichord-driven jam, Ian Brown stops by the riverside to occasionally noodle out the various bits of the song. First a three-note guitar solo, then the heavily Mani-like bass line, and finally a quick shot of Ian behind the kit. It all ends in dramatic fashion as Brown tosses a guitar into the river, perhaps a not-too-subtle message for John Squire?

All things considered, it’s a cool song. But I can’t help wondering how it would sound with the backing of his bandmates. It seems tailor made for Squire’s wah funk guitar work, and maybe somewhere in the vaults is a version of just that? Given the unpredictability of the Roses, we may never know. Or we might? Who knows?

In the meantime, go for a ride with the Monkey King and let’s hope the rest of the album is this cool.