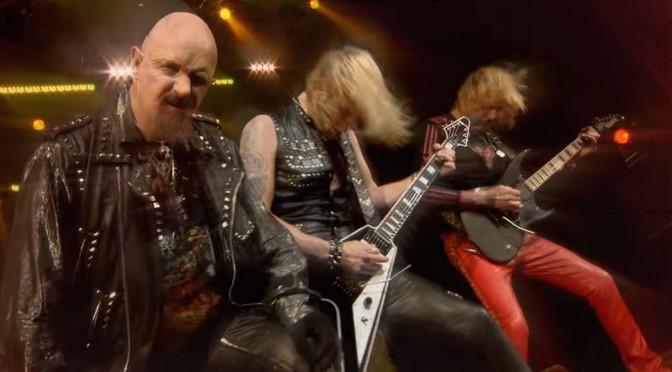 From Firepower, out March 9 on Sony Music.

The thing about being a Judas Priest fan is that it is not based on rationality. Unless, of course, you think sitting in a dark basement room with your favorite bottle listening to “Better By You, Better Than Me” is reasonable. It’s not. It’s quite insane. And that is rather the point (of entry).

And so it is that Halford and company have headed out to the highway once again, cranking up the speed of a heavy kind with the new release “Lightning Strike.” Yes, if there is one positive message the boys from Birmingham want to get across it is that whilst lightning may not strike twice, the Demons from Hell do. Fifty million times, as a matter of fact. Not to mention untold millions of metal maniacs in heavy metal parking lots all around the world.

Were we to judge the old gents from the thorns they produce we’d be obliged to say that they do look and sound pretty good for men who surely lost touch with reality lo so many years ago. Crunching guitar(s)? Of course. Lyrics equivalent to the ramblings of a mental patient obsessed with the occult? You bet. Will this satisfy the fans of yore? Well that is not so easy to answer.

Do you suppose that a Chicago Bulls fan from say, 1993, is quite pleased with the product put on the floor today? After all, it’s still NBA basketball and they are amazingly talented. Err, but some of the old magic is not quite there now is it?

Now before you get too concerned and think your buddy Crustin does not like the music please don’t misunderstand. As one who has reaped a living nightmare from hell since the good old days of Sin After Sin, the latest video, album, and I am sure subsequent tour, are perfectly in line with those of us who are legion, and live beyond the realms of death.

Oh, and it is not as horrific as “Turbo Lover.”