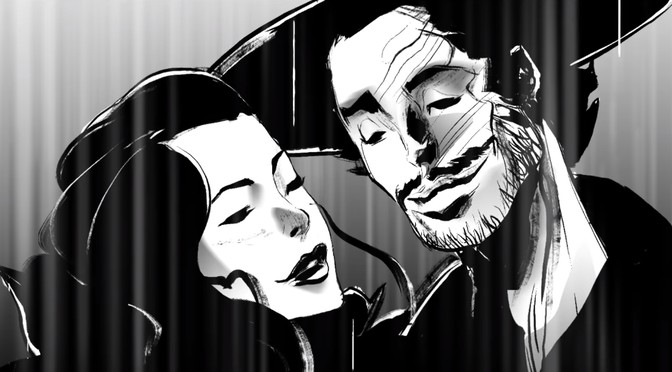 Directed by Mustashrik. From Look Now, due October 12 on Concord Records.

“Suspect My Tears” is ostensibly by Elvis Costello and the Imposters. Elvis is certainly front, center and foremost on the orchestration, for a full-throated orchestration it is. And, no doubt, Nieve, Thomas and Faragher are playing their instruments on the performance.

But the real sound comes from Burt Bacharach, the man with whom Costello collaborated on 1998’s Painted from Memory.

Now look at that date for a moment: 1998. That’s 20 years ago. A life and then some in professional music. When the two created that album Costello was 44. Bacharach 70. The two, remarkably, still have it.

When some people hear the strings, hear the back up vocals that might sound completely suitable for a Dionne Warwick single, hear the torch-song-like singing, their reaction might be: Costello has lost it.

But so far as “Suspect My Tears” goes (I’ve yet to hear the entire Look Now so I can’t comment on the other cuts), it is simply that Costello has gone back to a type of music that has the sort of emotional resonance that arguably has its roots in “Alison.” That song appeared along with “Welcome to the Working Week,” “Mystery Dance” and “Waiting for the End of the World” on 1977’s My Aim Is True. Arguably “Alison” is an anomalous cut on that disc, yet its lyric stands as the title of the whole thing.

So maybe Elvis is going back to his roots in some ways.

Costello has created a body of work over the past 40 years in a way that few of his contemporaries have. For example, take Graham Parker. He and the Rumour put out the same hard-driving “Pump It Up”-like music when Costello was with the Attractions. And Parker had and has the same lyrical gift that Costello has and a seemingly similar sensibility or worldview. Yet Costello has created everything from works with a string quartet to the soundtrack for a British TV show to country music to some of the most resonant rock of all time. Parker went solo, minimal, and then back with the Rumour (and now the Goldtops). Parker is an acquired taste that once imbibed continues. Costello is someone who seems to be constantly changing in some ways, yet clearly consistent. There seems to be more musical relevance and endurance, but the relevance is timeless.

“You’re not the only one who can turn it on
“When you need it
“I’ll cry until you suspect my tears.”

People don’t seem to write too much music about heartbreak any more.

So this is a rare thing. A rare, sumptuous, beautiful thing.

And if those adjectives aren’t the sort of thing that you associate with Costello, if Painted from Memory doesn’t strike you as the work of two brilliant collaborators, then God Give Me Strength.

One thought on “New (Old) Costello: Suspect My Tears”