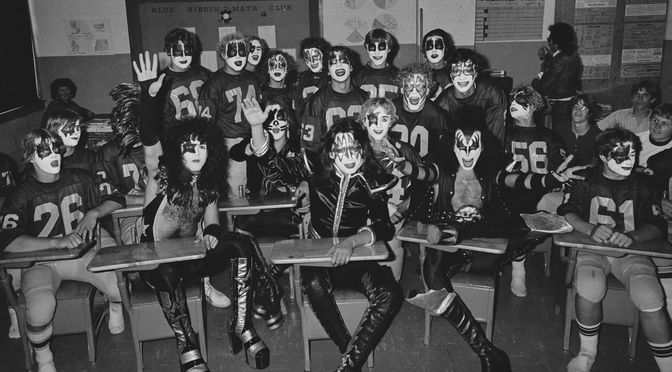 Every single thing about this article from FOTO magazine is amazing: “When KISS Rocked Cadillac -- KISS was on the cusp of superstardom when a small, conservative town in northern Michigan invited the band to visit. The rest is rock history.”

It sounds like a Hollywood screenwriter’s fantasy: a small-town high-school football team turns around a losing season, inspired by the music of wildly theatrical rock and rollers from New York. The team contacts the group with an unlikely ask: Would they consider visiting, so the town can say thanks? The band, on the cusp of superstardom, agrees — resulting in one of the most improbable, wholesome, heartwarming stories in rock history. But this was no movie: the year was 1975; the town was Cadillac, Michigan; and the band was KISS. Here, after unearthing never-seen photos from the event, FOTO celebrates an unrepeatable pop-culture moment, and speaks with a man who helped make it happen.

Cadillac is a small town (population: 10,000) in the middle of rural northern Michigan. As a kid we would drive through it on our way “up north” to nicer places like Petoskey or Mackinac island. The expressway ended right before you got to Cadillac so we’d often stop at the Dairy Queen or the Big Boy. We’d gawk at the sign for a place called Stopless Topless. But in 2001 MDOT extended the expressway all the way up to Manton and since then there hasn’t been any reason to stop in Cadillac.

But back in 1974 Cadillac High’s assistant football coach played the team KISS music in the locker room to inspire the team. They went on to have a winning season and the coach wrote to KISS to thank them. So the next year when KISS was on their Alive! Tour they were invited to participate in the homecoming parade and receive the key to the city.

This isn’t a new story. And there was a lot of local press around it in 2015 for the 40th anniversary. But FOTO has found a trove of previously unpublished photos taken by Irish music journalist Fin Costello, and they’re unbelievably awesome. See for yourself.

And then check out some of the previous coverage and photos, because it’s all great.

• “Gene Simmons on 1975 Cadillac High School concert and parade: ‘It was almost as if we landed on Planet KISS'” by John Gonzalez (MLive, September 29, 2015) with an equally great gallery of 23 photos that were given to Coach Neff by KISS in 1975 with permission to use with no restrictions.

• “KISS does a high school Homecoming” by Danny Arruda (ESPN, March 1, 2010) with a bunch of great photos, including some in color.

And check out a great video, below, featuring archival footage from 1975 as well as some interviews from 2010 with Gene, Paul, the coach, a couple football players, and the head cheerleader, who has a story that shouldn’t surprise anybody.