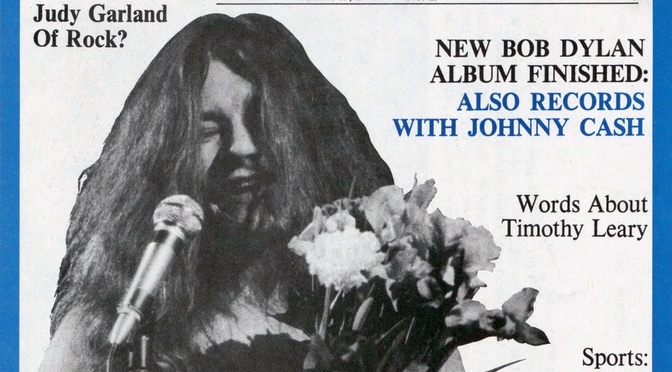 Features: “Bob Dylan: ‘I Can’t Remember Where They Come From'” by Jann Wenner; “Janis: The Judy Garland of Rock and Roll?” by Paul Nelson; “Roller Derby: Nobody Loves Us But The Fans” by John Grissim, Jr.; “The Incredible String Band” by Michael March; “The Fool” by J.M. Rose; “Flatt & Scruggs” by David Gancher; “Forgiven” by Richard Brautigan. 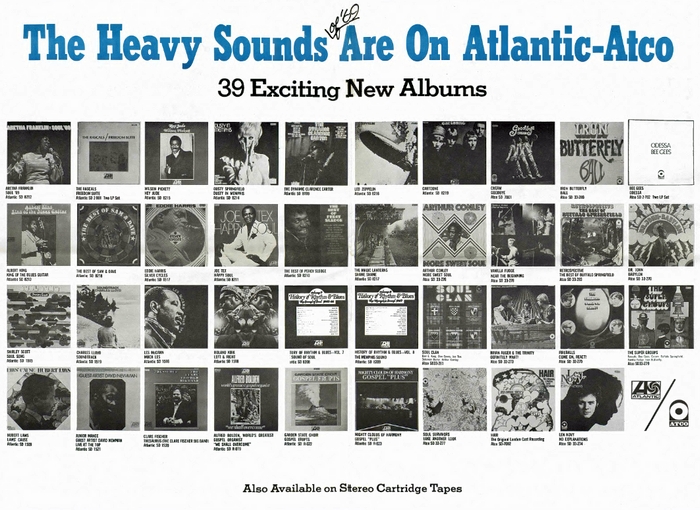 Columns: “Books” by H.C. Garwicker (on High Priest and The Politics of Ecstasy by Timothy Leary).

Full-page ads: Under the Jasmin Tree by Modern Jazz Quartet and James Taylor on Apple Records; Song Cycle by Van Dyke Parks on Warner Bros; Sunn amplifiers; Who Knows Where the Time Goes by Judy Collins on Elektra; The Pentangle on Reprise; The Heavy Sound of 69 Are on Atlantic-Atco (two-page);

More ads: The Natch’l Blues by Taj Majal on Columbia; A Tribute to Little Walter by George Smith on World Pacific; Wings of Man by Danny McCulloch on Capitol; West by Bridges on Epic; Blood Sweat and Tears on Columbia; Outrageous by Kim Fowley on Imperial; The Beginning of British Blues on Immediate; Rock Blues on London Records; Gretsch Drums.

Reviews: Autumn by the Don Ellis Band/The Worm by Jimmy McGriff/Count’s Rock Band by Steve Marcus (by John Burks); Led Zeppelin (by John Mendelsohn); Hawks and Doves by Passing Clouds/The Good Rats (by Alec Dubro); Sweet Child by The Pentangle (by Gary Von Tersch); The Family That Plays Together by Spirit (by Barret Hansen); Born to Be by Melanie/The Marble Index by Nico (by Anne Marie Micklo) Shake! by The Siegel-Schwall Band (by Pete Welding).

Poetry: “Night Was a Better Blanket” by Lotti Golden; “If Lost Return to 1929” by John Urban.