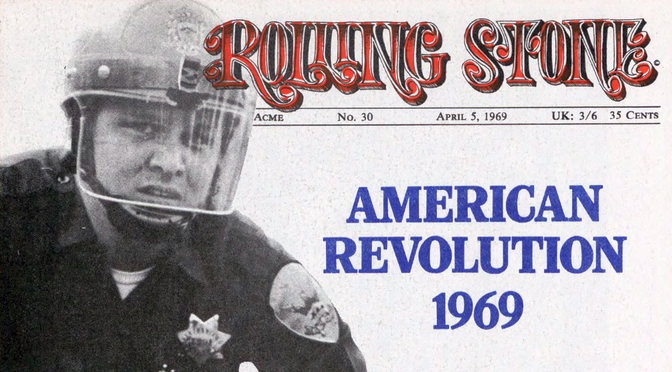 Rolling Stone issue #30 had a cover date of April 5, 1969. 40 pages (20 standard pages with a 20-page special insert). 35 cents. Cover photo of San Francisco State College student strike by Nacio Brown. This photo was originally published in the San Francisco Express Times on December 11, 1968. (You can see more of Brown’s photos from the strike here.)

Less than a year after openly mocking the student protesters during the 1968 Democratic National Convention in Chicago (“Musicians Reject New Political Exploiters: Groups Drop Out from Chicago Yip-In,” RS-10), Jann Wenner has a change of heart and gets political. His introduction to Michael Rossman’s cover feature reveals he is being reluctantly dragged into this…

Like it or not, we have reached a point in the social, cultural, intellectual and artistic history where we are all going to be affected by politics. We can no longer ignore it. It threatens our daily lives and our daily happinesses. The new political movements we feel all around us can no longer be left at the periphery of the artistic consciousness.

Our black population and our student population have finally declared themselves sick and tired of desolation row and finished with the old folks home at the college. The blacks and the students are our brothers and they are doing something which we must take awareness of. And we must participate in it because they are fighting a fight against our enemies, even if our participation is just by the fact of awareness itself.

These new politics are about to become a part of our daily lives and willingly or not, we are in it.

The fact that Wenner claims “The blacks and the students are our brothers” and not his intended audience is telling. Oh, Jann! Gotta love his idea of participation in the fight “just by the fact of awareness itself.” Yeah, I’m sure the kids getting their heads bashed in by the cops really appreciated your awareness, pal.

Do-gooder Baby Boomers, unwilling to really get involved, but hey, at least they’re aware of the struggle!

Features: “American Revolution 1969: The Sound of Marching, Charging Feet” by Michael Rossman; “It Can Happen Here” by Conrad J. Williams; “Editorial” by Konstantin Berlandt; “Panthers’ Fight to the Death Against Racism” by George Mason Murray; “The Fire This Time: A Cursory Chronology of the Movement.” 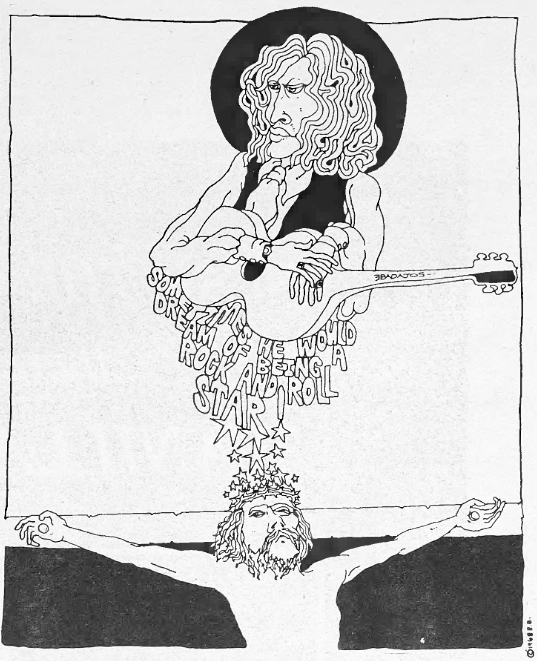 Columns: Perspectives by Ralph J. Gleason (“Is There a Death Wish in U.S.?”) and Books by John Grissim, Jr. (on Dear Doctor, Hip Pocrates: Advice Your Family Doctor Never Gave You by Eugene Schoenfeld, M.D.).

Full-page ads: Van Morrison’s Astral Weeks on Warner Bros; Near the Beginning by Vanilla Fudge on Atco; Jethro Tull on Reprise; Muntz Stereo-Pak cartridges (2-page spread); Steppenwolf At Your Birthday Party on Dunhill; Happy Trails by Quicksilver Messenger Service on Capitol; Kick Out the Jams by the MC5 on Elektra; Baldwin Exterminator amplifiers.

More ads: Moby Grape 69 on Columbia; Tons of Sobs by Free on Island; Linda Ronstadt’s Hand Sown…Home Grown on Capitol; The Poetry of Rock by Richard Goldstein (Bantam Books); Ovation Instruments; The New Electric Circus; Electro-Harmonix Power Booster; My Griffin Is Gone by Hoyt Axton on Columbia; John Mayall on London; The Early Bird Cafe by the Serfs on Capitol; The Last Ritual on Capitol; Ars Longa Vita Brevis by the Nice on Immediate; Eddie Harris’ Silver Cycles on Atlantic; Observations in Time by the Ohio Players on Capitol.

Subscription offer: New subscribers could get a free copy of Ike and Tina Turner’s River Deep – Mountain High (with 50 cents for shipping and handling). $6 for 26 issues; $10 for 52.