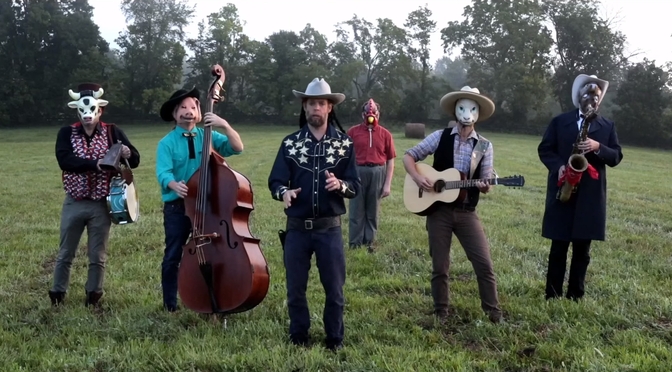 Directed by Jacob Forman. From I Made A Place, due November 15 on Drag City and Palace Records.

Heck yeah! The fact that the world is doomed isn’t going to bring down our Bonnie Prince, no sirree. He’s already gearing up for the post-apocalypse with a jangly Cosmic American jam that wouldn’t sound out of place on The Fantastic Expedition of Dillard & Clark.

When we hear the frogs again we’ll be set to raise our heads
And it won’t matter then if the rest of the world is dead.
Yes between you and me we’ve got a re-population kit
The world will rise again from the back of the pit.

And there’s a new album on the way, too, the first new collection of Will Oldham originals since 2011’s Wolfroy Goes To Town. Oldham says, “In recent years, the whole world of recorded music, in the way that such music is conceived, perceived, recorded, released and distributed, has been atomized. I tried holding my breath, waiting for the storm to pass, but this storm is here to stay and its devastation is our new landscape. What else is a person to do except what he knows and feels, which for me is making records built out of songs intended for the intimate listening experiences of wonderful strangers who share something spiritually and musically? I started working on these songs thinking that there was no way I was going to finish them and record and release them. This was a constructive frame-of-mind that protected the songs until this frightening moment when we let go of them and give them to you.”

We’ll take them from here!