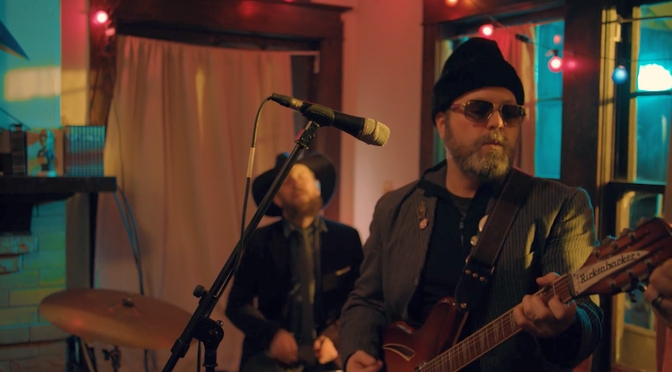 Directed by Matt Schulte. From The Complete Recordings, out soon.

My fellow GLONO founder Derek Phillips and I have been pals for over thirty years. Throughout these decades he’s always been in bands. Almost too many to count. But because I am a collector and an amateur archivist (a/k/a hoarder), I can count them: thirteen. Wednesday’s Children, the Holy Moly Revival, Siamese Beetle, the Silence, Leslie, Silver, the Vantrells, the Overtones, Moline Dorr, the Blue Ribbon Brothers, Riviera, the Dirty Lawfords, and now Daystar.

I’ve followed each of these bands over the years, and I’m excited about Daystar. They’re a real rock and roll band!

Daystar was formed in Portland with Joel Roth, Nick Foltz, and Kelly Simmons, and their debut album, The Complete Recordings, is coming this summer. They shared its first single, “Right at Home,” based on the occupation of the Malheur National Wildlife Refuge, back in October.

“Buttons and Brass” is based on more innocent shenanigans: teenagers with nothing to do except goof on each other.

Hanging out, ’cause nothing’s doing
It’s all about somebody else
Push away and Dewey’s stewing
Crying out about broken belts

There were lots of high school weekends when parents were out of town, sitting around somebody’s kitchen table, playing Quarters with Milwaukee’s Best and Doritos. Sink three in a row and you get to make up a rule. Top 3 Quarters rules, in order: 1. Can’t say “drink/drank/drunk,” 2. Gotta call everybody Dave, and 3. Before you consume, you have to stand up, grab your junk and say, “I have a very tiny penis.” Good clean fun.

That level of social awkwardness is carried into the video, shot at Fluff & Gravy Records in Portland and directed by Matt Schulte, wherein our hero repeatedly tries and fails to make the scene. That’s alright, homie, there’s always Quarters.