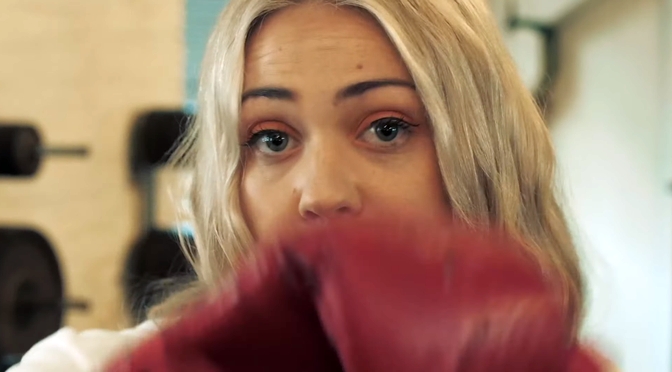 Lauran Hibberd already released one of the catchiest singles of the year with “Hootchie” and now she’s closing out the year with a new one. The “Sweat Patch” video sees the Isle of Wight singer pumping iron and getting swoll.

I never asked if you were
Down for one more
What the hell are you waiting for?

When I was a youngster my mom’s sister briefly dated a guy from the Isle of Wight. He visited the States once and got introduced to our whole extended family. He was super charming and spoke with the most elegant accent I had ever heard. You’ve heard the myth that British people drink warm beer? I think this guy might have started that. He would take a six pack out of the fridge and set it on the counter.

Several years later, I spent a semester in Scotland and was shocked that the pubs served cold beer. My mom visited and we actually met up with this guy down in London. And he totally hit on my mom, his ex-girlfriend’s sister! My mom rebuffed him, of course.

By then, I had spent enough time with the natives that I could differentiate between all the regional accents and the class statuses they implied, and I realized that this guy wasn’t quite as sophisticated as he seemed to a bunch of American rubes. Or as chivalrous. He was basically a dirty old sailor. But hey, he gave us a great tour of some cool spots and barely got a kiss on the cheek out of the deal. So I’ll raise a glass to him. But whatever’s in it, it’ll be cold.