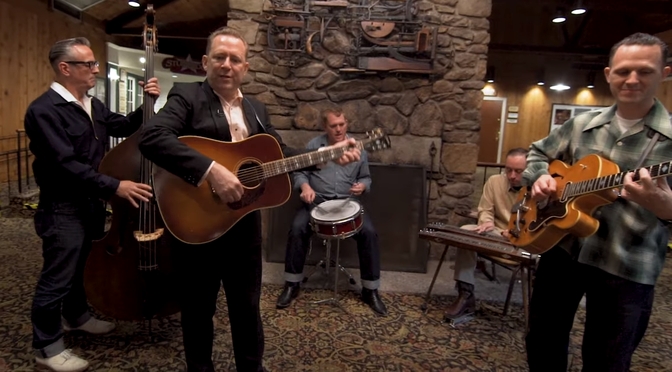 From an upcoming single on Swelltune Records. Filmed at the 2018 New England Shakeup festival.

On my first trip to New Orleans I got way too drunk and abused my host’s hospitality. She had one rule: no puking in her house.

We had been out all day with her New Orleans pals and at night we all went to see Tav Falco at a club called Muddy Waters. Her friends all dressed sharp in vintage suits. Me and my pals were sloppy drunks.

When I woke up in the morning on my friend’s floor I felt terrible. Like my skull was cracking open. I had no recollection of how we made it home. But Mike Hurrt was in the kitchen cooking skillet eggs for everybody. They smelled delicious and tasted wonderful but as soon as the food hit my gut I knew I was in trouble. I excused myself and barreled out the door and ran as far as I could down the street to find a safe place to barf. I knew I had to get out of earshot of my host or she’d be really mad. I emptied my stomach and walked around the block until my head was clear.

By the time I got back to the house everybody was done with breakfast and Hurtt was interviewing Tav Falco in a back room. I hadn’t realized that Falco spent the night too! But that’s the magic of New Orleans. At least it was back in the early 90s. I haven’t been back since Katrina…

Hurtt formed his Haunted Hearts in New Orleans (where they impressed Hunter S. Thompson one night), but he’s been based out of Hamtramck, Michigan, for a while now. I love their 2006 debut, Come Back To Louisiana, and enjoyed their 2013 Christmas single, but I just realized I completely missed the album they released in 2015, Struck With The Blues. Going to have to look for that.

Not only is Hurtt a fine singer and songwriter (and egg slinger!), but he is an absolute scholar of rock and roll. He’s been published in MOJO magazine, the Detroit Metro Times, and he wrote a ton of great stuff for Offbeat magazine.